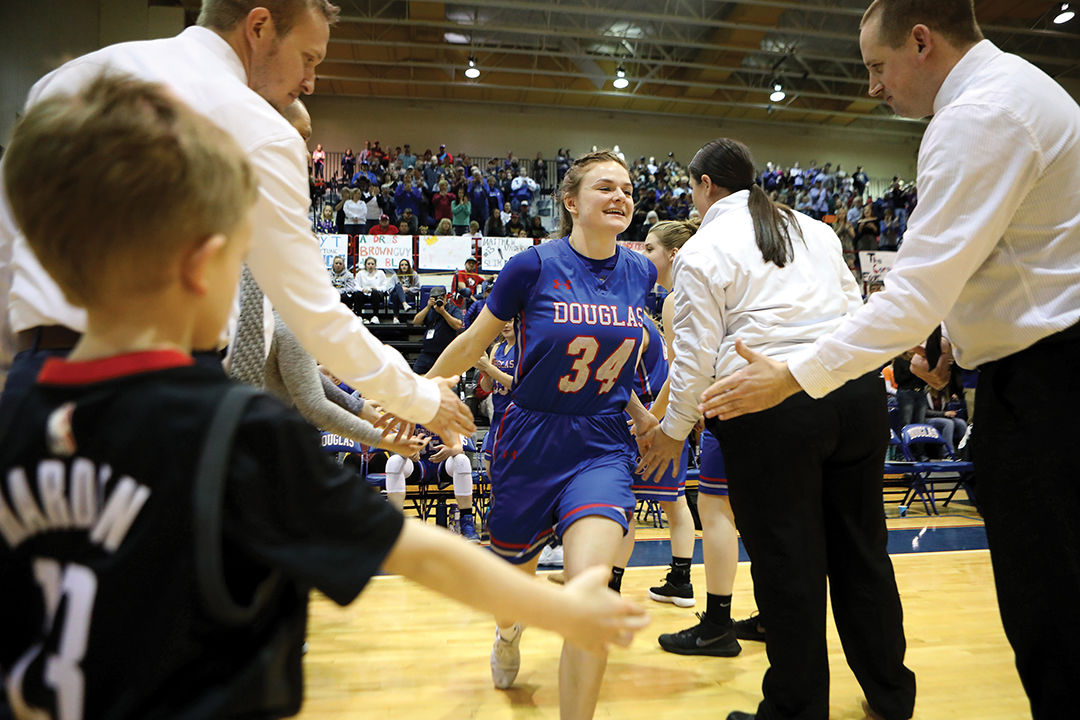 Douglas coaches low five Curtis as she is introduced prior to a game at last season’s regional tournament. Curtis will bring athleticism and leadership to the court for the Montana Western women’s basketball program next season and will look to help a program that went 27-9 during the 2017-2018 season. 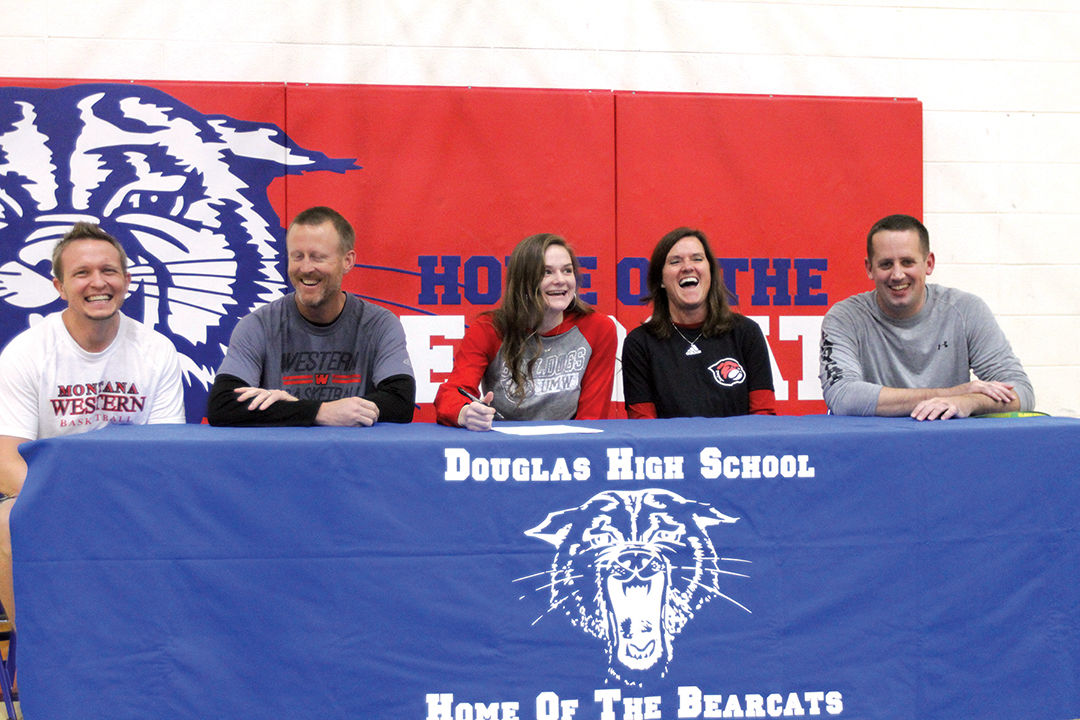 Flanked by her mother, Aiyanna, and, father Mark, Curtis signs her letter of intent to join the Bulldogs basketball program at the University of Montana Western during a ceremony Nov. 26 at DHS. Curtis was joined by the DHS coaching staff, and dozens of teammates and friends on her big day.

Douglas coaches low five Curtis as she is introduced prior to a game at last season’s regional tournament. Curtis will bring athleticism and leadership to the court for the Montana Western women’s basketball program next season and will look to help a program that went 27-9 during the 2017-2018 season.

Flanked by her mother, Aiyanna, and, father Mark, Curtis signs her letter of intent to join the Bulldogs basketball program at the University of Montana Western during a ceremony Nov. 26 at DHS. Curtis was joined by the DHS coaching staff, and dozens of teammates and friends on her big day.

“It was always a goal of mine but I was never really expecting it,” Curtis said about playing basketball at the collegiate level, just moments after signing her National Letter of Intent to play at the University of Montana Western Nov. 26 at Douglas High School. “It’s all been really exciting.”

Flanked by her mother, Aiyanna, and, father Mark, Curtis put pen to paper as teammates and friends crowded around and took photos on their phones to show support for their classmate.

The Bulldogs first expressed interest in the 5-foot-8 guard this past summer while she was playing for the Wyoming Beasts, a basketball club based out of Cheyenne. She began looking at her prospects much closer at the beginning of the year, visiting Chadron State College, Gillette and Montana Western.

“I made a big pros and cons list but it really came down to where I felt most comfortable,” Curtis said.

From the beginning, Curtis felt like her heart was in Dillon, Montana. And after weighing both the pros and cons of Montana Western and Gillette, she decided she was meant to become a Bulldog.

“It was kind’ve challenging,” she said about making her final decision. “I really liked the coach and the players. The atmosphere of everything during my visit was really positive and it’s a really beautiful town.”

During her junior season, Curtis averaged 8.4 points, 2 steals, 2 assists and 1.6 rebounds per game for Douglas. She was named All-Conference and helped lead the Bearcats to an undefeated season and a state championship.

In Curtis, Douglas head coach Cody Helenbolt is confident that Montana Western isn’t just getting a top-tier basketball player, but a leader and a good person as well.

“She’s a great kid and that’s probably been the most fun to watch,” Helenbolt said about Curtis. “She’s a leader of the school and does things the right way. They’re getting a good person and that’s the biggest thing that we want to do.”

Curtis has played at the varsity level since she first entered the doors at DHS and has been a big part of the Lady Cats’ success over the last four years. Helenbolt said it’s been a treat to watch her grow and mature during that time into the basketball player that she’s become.

FIRST PITCHES: Getting into the SEC? Yep, it really was half the fun

Prior to the start of last season, he saw a transformation that even at the time, he knew had the potential to lead to something bigger.

“She put in a lot of work during the summer and when we started off last year, she was our leading scorer and our best player through the first few games,” Helenbolt recalled. “It was fun for us because we had seen her put in the work, but then she scored 20 points a game the first few games out and that’s when I think everything started clicking for her.”

“Emily is going to fit seamlessly into our program and we are excited to have her in Dillon,” Woolley said. “She comes from a winning high school program and her intelligence, athleticism and character are excellent. Her future is bright and we are glad she chose to become a Bulldog.”

Aiyanna and Mark beamed with pride as they watched their daughter sign what may be the most important piece of paper that she’s seen. She will continue playing the game she loves and at a level she’s truly blessed to be able to play at.

“First I’d like to thank God for giving me this ability and this opportunity,” Curtis said. “I also want to thank my parents who were the ones that started me on this journey, my coaches all the way from rec league to middle school, to high school and AAU . . . and my teammates for pushing me everyday.”

Curtis’ athleticism has hardly gone unnoticed during her first three seasons for Douglas. According to Helenbolt, it’s what sets her apart. And it’s what has him most excited for her coaches at Montana Western.

“We’ve gone to camps with Division I coaches and they’ve said, ‘wow she’s a good athlete,’” Helenbolt said. “That stands out. Sky’s really the limit for her because there aren’t too many girls that are as athletic as she is.”

Curtis will suit up for her final season in Douglas in hopes of replicating last year’s success. Once she arrives in Dillon, she plans to study Criminal Psychology.

“I’ve been working toward this for a long time and I think I’m ready,” Curtis said with a smile. “I’m really excited.”