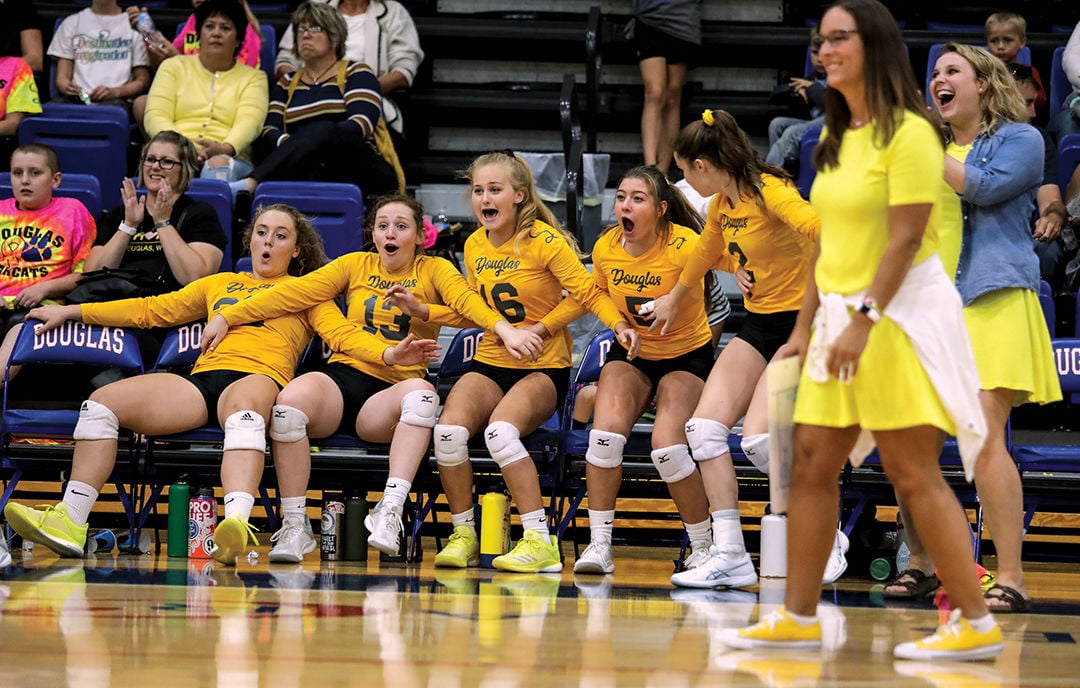 Lady Cat players fall backwards into their courtside seats after celebrating the winning point in the final set to defeat Newcastle 3-0 at home during their Gold Night childhood cancer awareness event in Douglas Sept. 21. 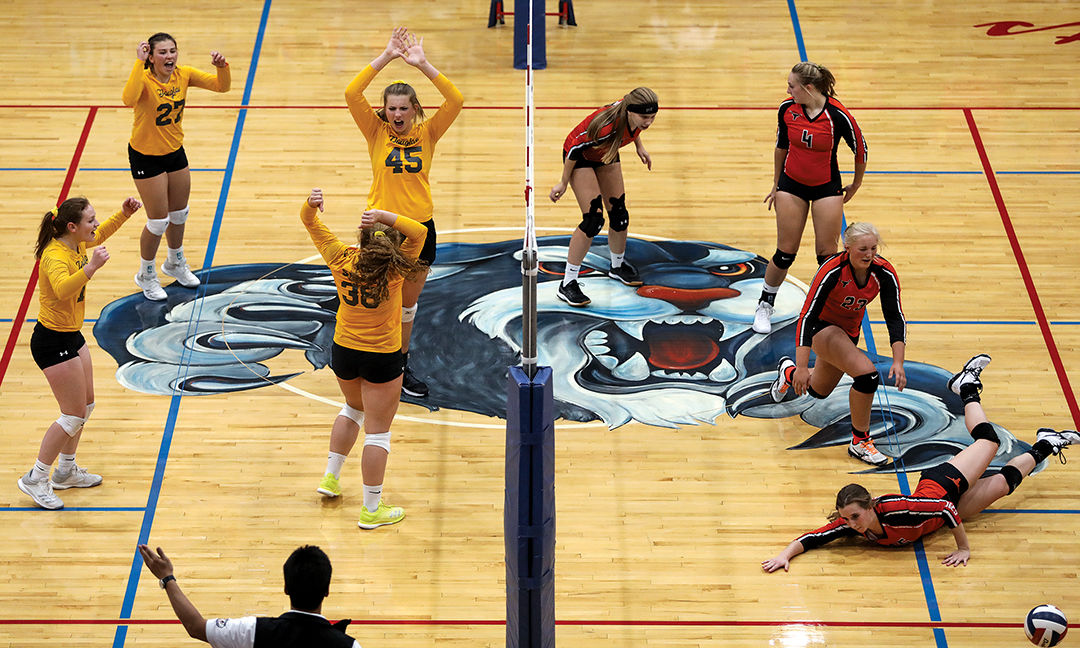 Douglas celebrates a scored point against Newcastle last Friday. The Lady Cats went on to win in three sets before sweeping Thermopolis Saturday to improve to 4-0 in quadrant play. 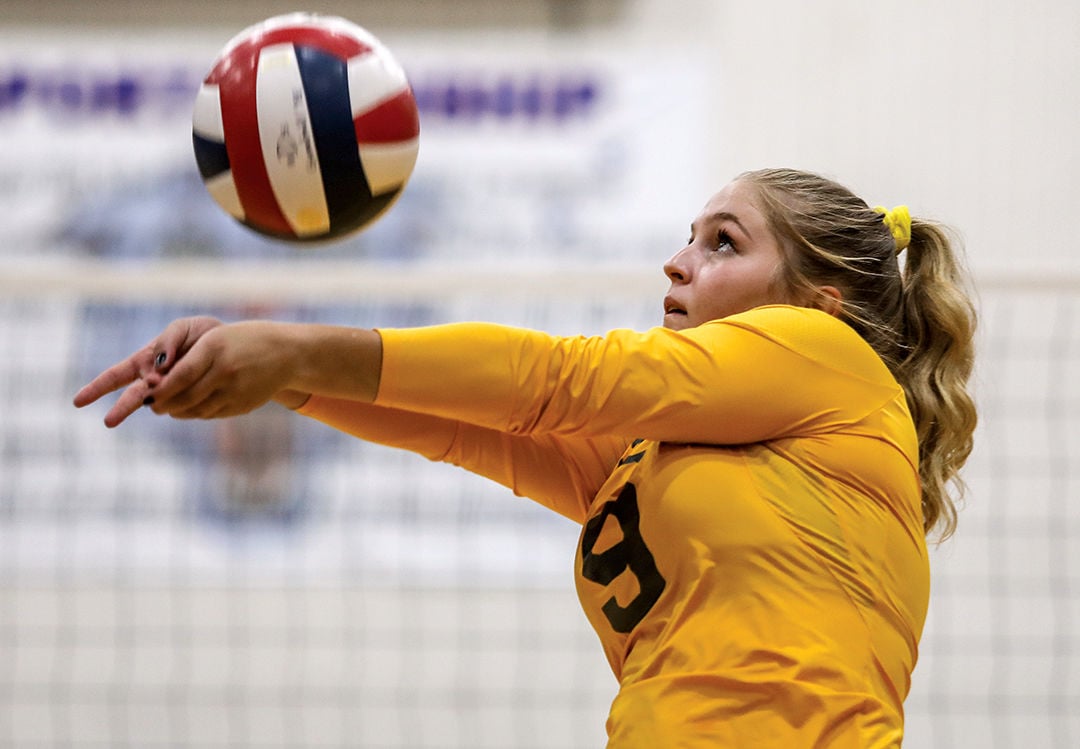 Lady Cat players fall backwards into their courtside seats after celebrating the winning point in the final set to defeat Newcastle 3-0 at home during their Gold Night childhood cancer awareness event in Douglas Sept. 21.

Douglas celebrates a scored point against Newcastle last Friday. The Lady Cats went on to win in three sets before sweeping Thermopolis Saturday to improve to 4-0 in quadrant play.

For the second year in a row, they abandoned their white and blue jerseys and wore gold in memory of Stella Beard.

Fans packed the home section of the Douglas Rec Center on Friday and eye-catching lightsabers glowed to help fight childhood cancer. For a few hours, this night was much less about volleyball and more about the fight for a cause.

“Our goal as a team is to spread awareness for childhood cancer,” senior setter Madison Tillard said. “We’re a very close and connected community and my team and I are so grateful to not only represent the town, but Stella and her family as well.”

The gold jerseys, which have become synonymous with Douglas and its fight for childhood cancer, were purchased by Andrew and Marissa Beard, the parents of 3-year-old daughter, Stella, who passed away last year from rare pediatric cancer after a three-month fight.

The Lady Cats wore those jerseys throughout September of last year and also during the state tournament. It’s a gesture they’ve kept close to their heart and is something they’ll continue to carry with them.

“Gold night to me as a member of the volleyball team is something I will always cherish in my life,” defensive specialist and Stella’s aunt Emma Saunders said. “I love seeing all of my teammates wearing gold to support the cause and raise awareness. It’s something that I can always look back on in my life and know that my team and community were there for support.”

On the road Saturday in Thermopolis, the Lady Cats won their sixth consecutive match. They also swept their fourth opponent in just over a week’s time.

“We definitely didn’t play as clean as we did when (they) came here a week ago, and to their credit, they were much scrappier on defense,” head coach Angela Rhoades said about the Lady Bobcats. We had some closer sets with them which I think was good for us.”

The week prior, Douglas handled Thermopolis with relative ease. They controlled the tempo in all three sets and dominated them with a strong serve game, 25-8, 25-7, 25-8.

This time around, the Lady Bobcats kept each set competitive and put pressure on the Lady Cats at times, but were swept for the second time in a week, 25-16, 25-15, 25-22. Rhoades kept her focus on the team’s bright spots and also recognized how impressive they’ve been late in matches in recent weeks.

“Sometimes we get in the habit of keeping the ball in instead of working for an aggressive termination swing on offense,” Rhoades pointed out after Saturday’s win. “We work hard to keep the pressure on the other team and I was really happy we were able to close out a close set three on the road for our fourth consecutive sweep.”

Douglas is now 16-3 and 4-0 in quadrant play. With the postseason just over a month away, regional brackets are already beginning to take shape and the Lady Cats’ ceiling of potential continues to look upward.

They came into Friday’s match ranked as the number three team in 3A, behind Lyman and Rawlins, but place of ranking is the least of their worries. As they look down the schedule at their next five matches - all conference matchups - the Lady Cats’ continue to focus on strengthening their relationships on the court.

“Playing for one another motivates us more,” Tillard said. “It takes away the fear of making mistakes because we know that we’ll always be there to help each other. My teammates are so encouraging and it makes playing the game that much more enjoyable.”

The Lady Cats return to the court on Friday and Saturday for the Casper Invite.

In their pool, Douglas will play Sheridan, Cheyenne Central and Rock Springs, all 4A schools.