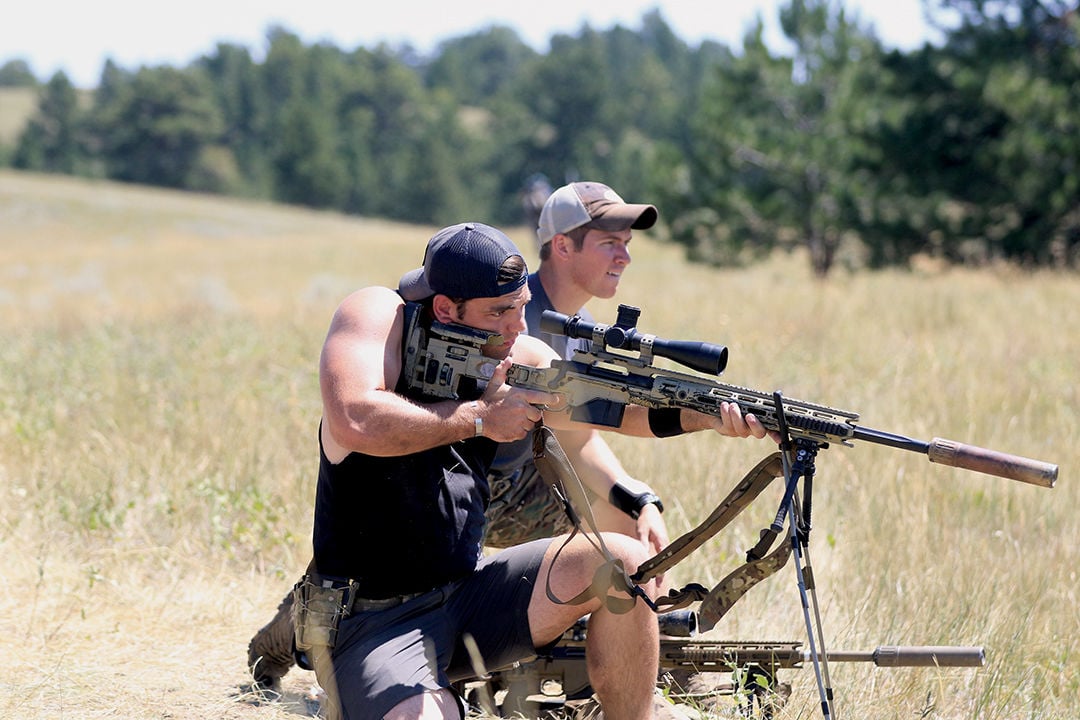 Seth McIntosh looks down the barrel of his rifle as teammate Seth Berglee surveys the shooting range. 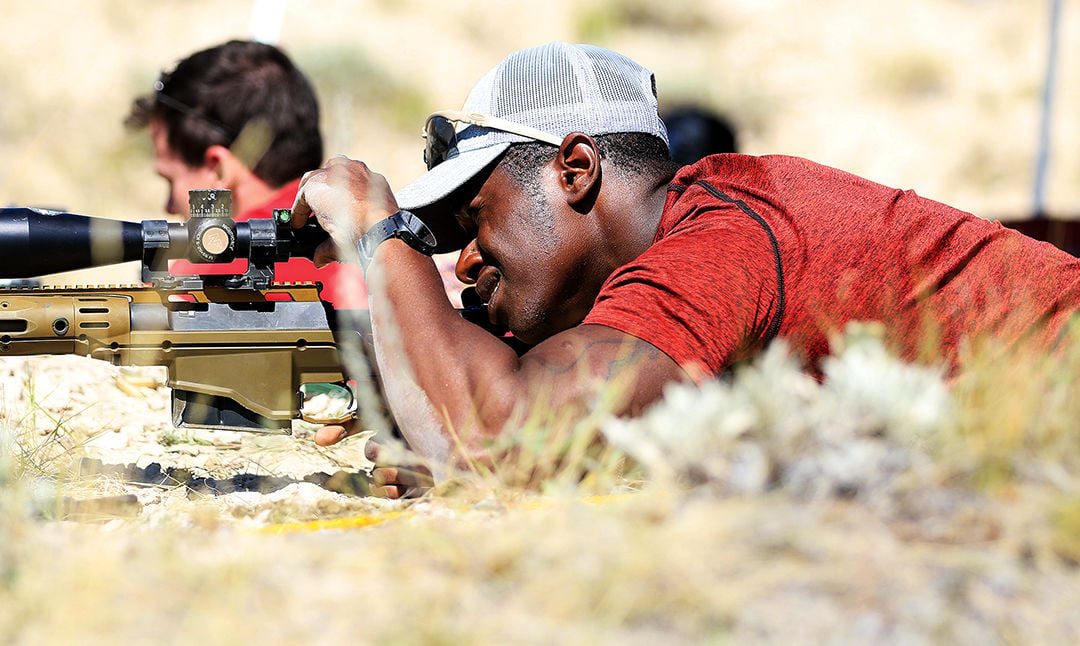 A Vortex Extreme competitor adjusts the settings on his rifle prior to beginning the next stage of the competition. 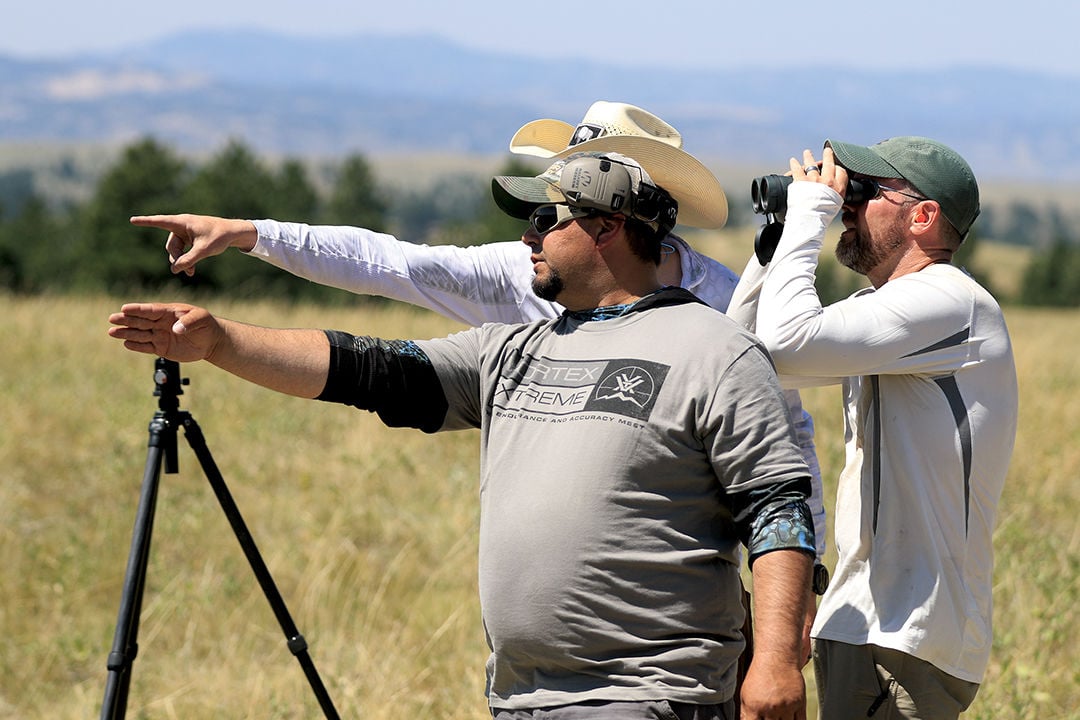 Matt Fry (from right) and teammate Nephi Cole (center, back) work with a spotter to identify the targets at their current stage of the course. 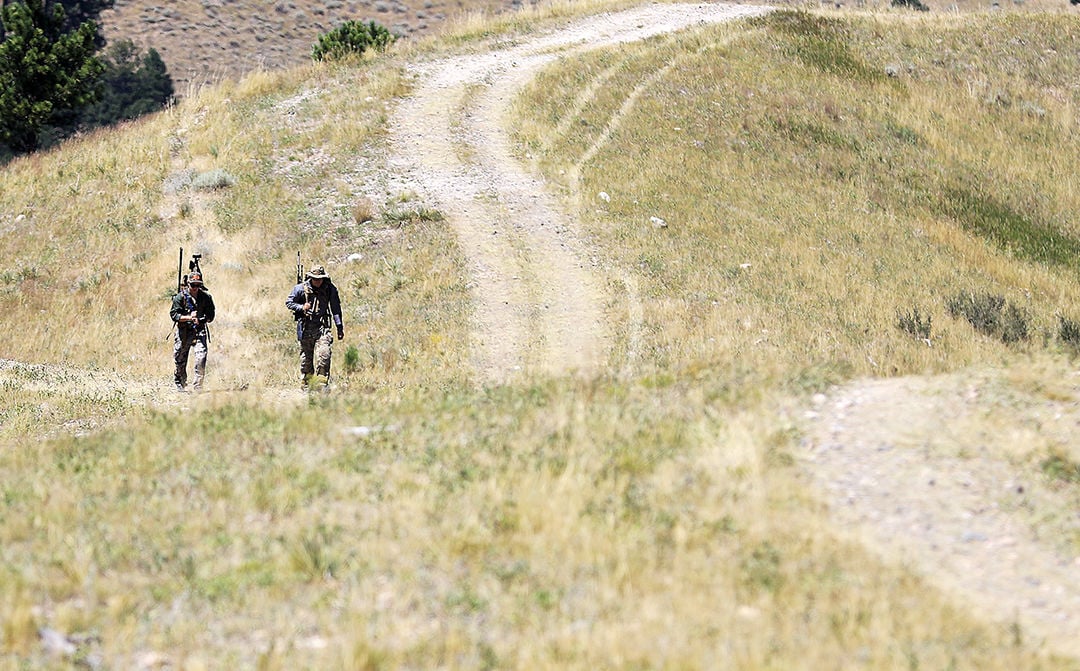 Shaine Staab (left) and Nick Diaz make their way up the gravel path to the next stage of the Vortex Extreme competition. Battling near 100 degree temperatures and fierce winds, shooters were required to traverse multiple landscapes on foot while being timed in order to complete the course. Staab, a resident of California, noted the elevation changes and the difficulties it created during the competition.

Seth McIntosh looks down the barrel of his rifle as teammate Seth Berglee surveys the shooting range.

A Vortex Extreme competitor adjusts the settings on his rifle prior to beginning the next stage of the competition.

Matt Fry (from right) and teammate Nephi Cole (center, back) work with a spotter to identify the targets at their current stage of the course.

Shaine Staab (left) and Nick Diaz make their way up the gravel path to the next stage of the Vortex Extreme competition. Battling near 100 degree temperatures and fierce winds, shooters were required to traverse multiple landscapes on foot while being timed in order to complete the course. Staab, a resident of California, noted the elevation changes and the difficulties it created during the competition.

The distinct ping of a bullet hitting steel echoes across the terrain.

It’s midday. And hot, even in the mountains south of Douglas. The sun is beating down on the mixed landscape of pasture, rolling high plains and alpine peaks. The terrain is perfect, the elevation not so much, for Californians Shaine Staab and teammate Nick Diaz, who have just completed stage six and are carefully packing their gear – long-range rifles and scopes – before moving on to the next station.

“The elevation is a b#&ch,” Staab says as he looks over his scorecard. “The adjustment has been tough.”

They are two of nearly 100 long-range rifle shooters who made their way to Douglas for the Vortex Extreme Shooting Competition. Hosted by the famed Wagonhound Ranch, the world-class event was a grueling test of terrain-based, long-range shooting skills and endurance Aug. 10. Stretching over seven miles, the course consisted of 10 individual stages, each with targets ranging anywhere from 400 to 1,800 yards.

Shooters were tasked with traversing changing landscapes – often having to navigate steep inclines and sagebrush – in order to advance from stage to stage.

In its eighth year of existence, this year marked the first time the event was hosted by the State of Wyoming. It had previously been held at the Spirit Ridge Rifle Golf facility in Tremonton, Utah. Mark Boardman, the director of marketing for Vortex Optics, praised Wyoming’s efforts to bring the event here.

“From the beginning, (they) welcomed us like a group of buddies,” Boardman points out. “None of this would’ve happened without their embrace.”

Choice of weapon is key

Landon Michaels, who took first place in the hunter division and third overall with teammate Chris Hinojosa, uses a rifle that weighs about half what most other rifles used that day weighed. And he uses that weight to his advantage, excelling in the endurance portion.

Other shooters carry much heavier rifles and quickly fall behind as the beaming sun beats down on them as they trek up and down the hillsides.

“Do you guys still sell that light Razor HD?,” one shooter asks Boardman as he packs up his gear to move to the next stage.

“Of course, let’s talk later and we’ll hook you up,” Boardman responds in his friendly salesman voice.

The lucky first wave of teams began the competition at 6:30 a.m. when temperatures were below 60 degrees. By midday, temperatures had reached the mid-90s and, by some later stages, the sweat poured off the foreheads of the unluckier ones as it nipped at 100.

From one end of the course to the other, shooters were forced to endure an elevation variation of nearly 1,500 feet. At many stages, they were challenged by fierce winds, which helped cool the heat but created other shooting problems.

“The landscape here is much more diverse than we’ve seen in the past,” Boardman said. “We shot on more of an arid course in Utah.”

Competition observers, riding in a Polaris RZR 900 side-by-side, avoided the grueling test of endurance. This course was not for the faintest of hearts. The rolling high plains and rocky shrublands made for a tiresome trek and, depending on launch time, likely made for a hot afternoon.

Not only were shooters carrying a backpack with a rifle strapped to it, but were also packed with ammo, magazines, wind meters, food, water and any support bags that competitors felt appropriate to bring along.

“This is beating me up,” one shooter said as he made his way through the course.

Once at the next stage, shooters either recovered and waited for the team in front of them to complete the stage, or unpacked their gear and began discussing the specifics of the range with spotters. They loaded their rifles, helped each other determine wind speed and direction and once ready, were required to complete the stage (hitting all targets) in the allotted time.

Some teams eased through the targets without a hint of a problem, while others were noticeably burdened by the wind and pressures of a ticking clock.

Recruiting Ticker, Jan. 23: A few young QBs on the Huskers' radar screen for 2021, beyond

The sweaty brows and feelings of frustration for some shooters were clear indicators that the course held close to its promise. The “extreme” competition lived up to its name.

“You can see it, some teams are much more accurate and really have that down,” Boardman says as the Polaris slows to a stop at the top of a hill. “Other teams are quicker and are more focused on endurance. But that’s what makes this competition so challenging . . . you have to be able to do everything.”

Time after time, shooters thank Boardman for the opportunity to compete and pass on high compliments to the course and facilities at Wagonhound Ranch.

Whether it was the wide range of landscapes or breadth of new competition, returning shooters say they are impressed with the move to Wyoming and embrace the new challenge. For Boardman, the change in venue made all of the sense in the world.

“With the hunting culture (here) and many other long-range competitions being held in Wyoming, we felt like it was a no-brainer,” he said. “Whether they are long-range hunters, Precision Rifle Series competitors or military snipers – we all love shooting. We feel fortunate that Gov. (Matt) Mead has been so supportive and open with us.”

Technological advances have pushed long-range shooting into the mainstream over the past decade and firearm manufacturers have seen substantial growth.

Dozens of competitors were outfitted with Vortex Optics gear while many others sported Gunwerks and Weatherby rifles. At a handful of stages, shooters sounded like MIT grads as they spoke about velocity and formulas for directing a 105-grain bullet reliably to “clink” on a steel target over 1,000 yards away.

Shooters traveled to Douglas from all across the country. From California, to Idaho, to Texas and even to Georgia, it’s a sign that the long-range shooting community is continuously growing.

Charles Sole, a co-founder of Strategic Match Design – Vortex Optics’ partner in hosting the event – notes the stigma surrounding guns around the country in this politically charged climate. He extends further praise for how Wyoming has become a home to long-range shooting.

“In parts of the country you see these types of events disappearing and the attitude around rifles changing,” Sole said. “These guys come out here and enjoy themselves and help each other become better shooters in the process. This is a tight community.”