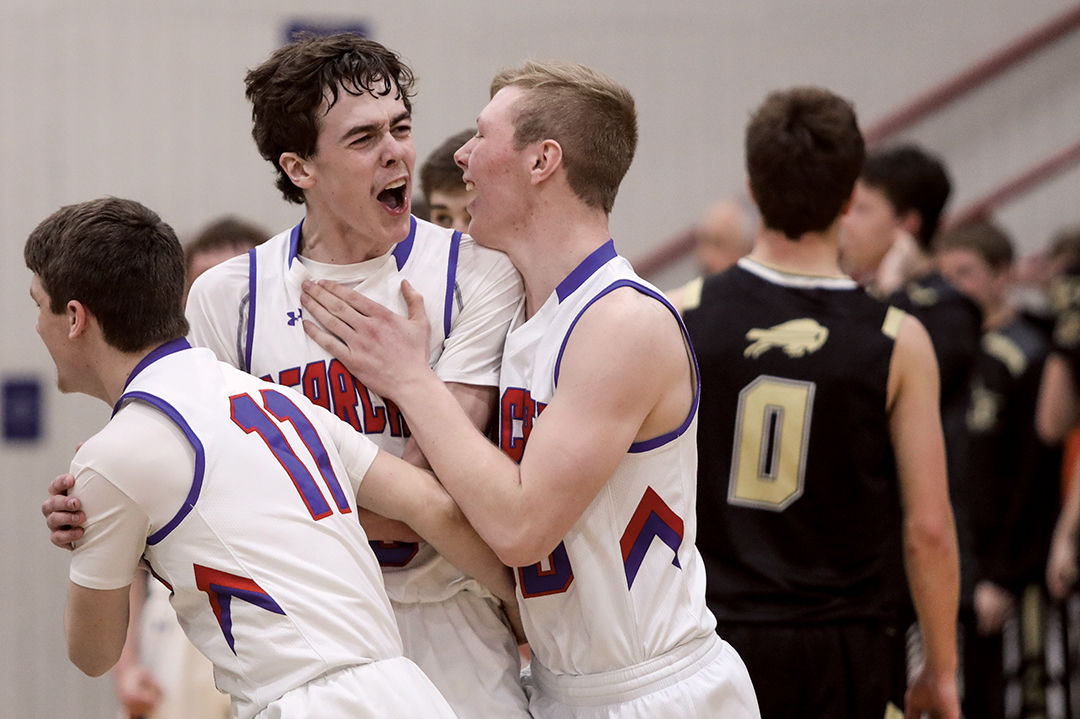 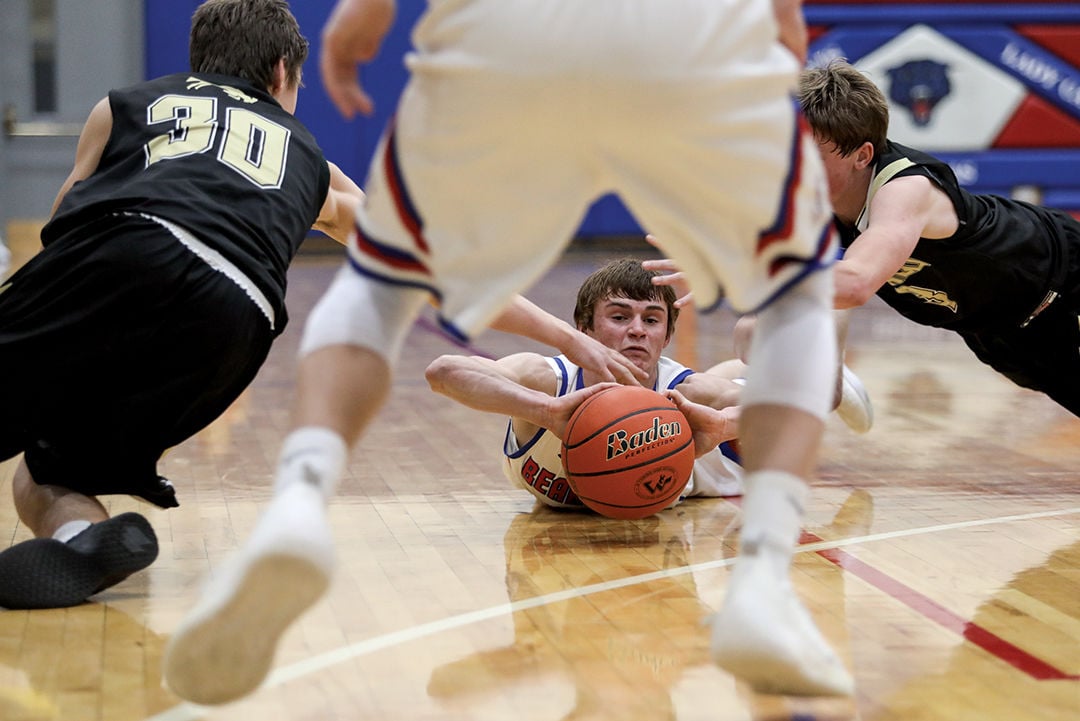 Senior Colby Davidson gets a successful last-second pass off to senior teammate Kenyion Townsend as Bison defenders close in during the tightly-contested basketball game at home last Friday. 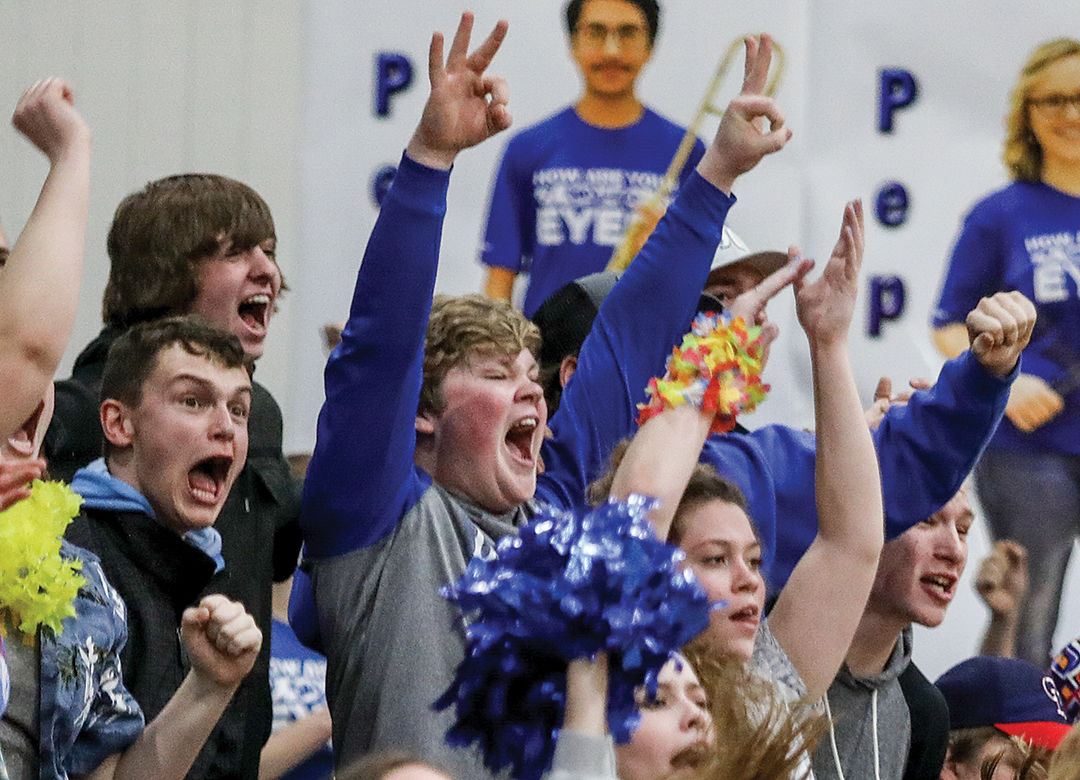 The student section erupts as Kanyon Cecil drains a three-point shot to close the gap against the Buffalo Bison. 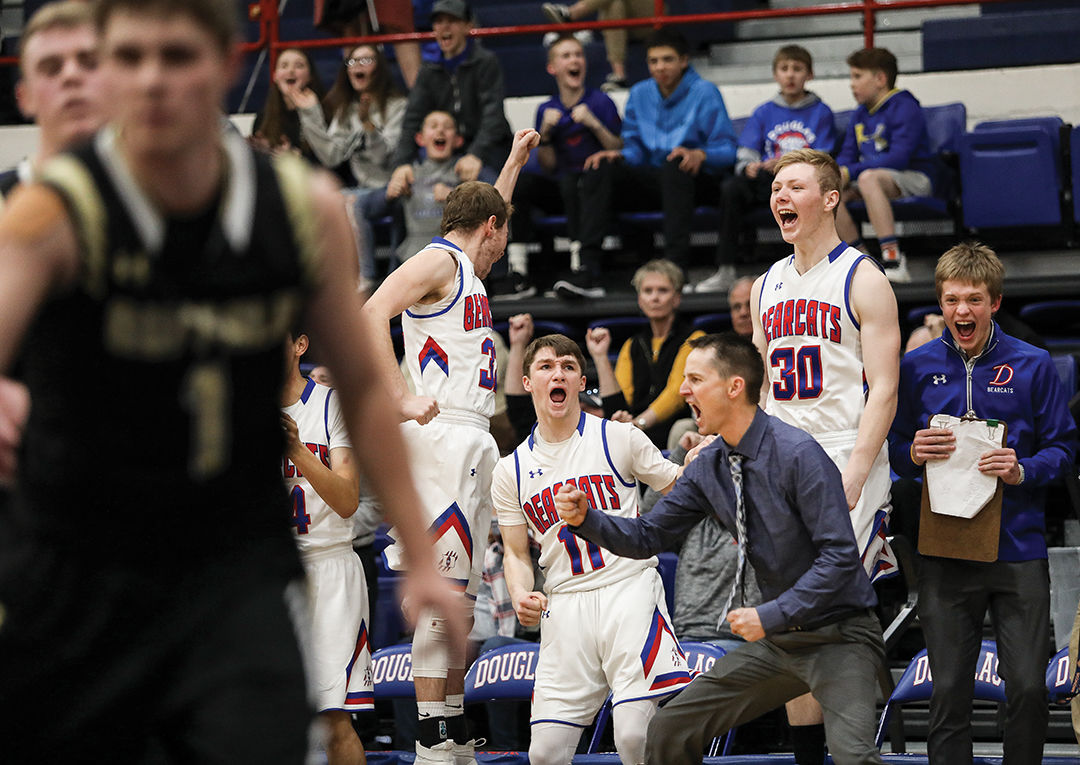 Head coach Chase Plumb and the Bearcat bench leave their seats in celebration as the Bearcats inch closer to a victory over Buffalo.

Senior Colby Davidson gets a successful last-second pass off to senior teammate Kenyion Townsend as Bison defenders close in during the tightly-contested basketball game at home last Friday.

The student section erupts as Kanyon Cecil drains a three-point shot to close the gap against the Buffalo Bison.

Head coach Chase Plumb and the Bearcat bench leave their seats in celebration as the Bearcats inch closer to a victory over Buffalo.

For the second time in a week, the Douglas Bearcats came through in the clutch behind a boisterous home crowd.

Trailing the top-ranked team in the state 50-39 to begin the fourth quarter, they chipped away one possession at a time. They remained calm behind their steadfast head coach. And down the stretch, they showed why they belong with the upper echelon of competition in 3A.

“As we made our way back the gym got louder and louder,” senior Kanyon Cecil recalled. “The last two minutes everyone was on their feet. That was probably the loudest I’ve ever heard the gym.”

As the fourth quarter opened up, the Bearats began the journey back with a three-pointer at the top of the key from senior Tait Larson to cut the deficit to 50-42. A few minutes later, after back-to-back empty possessions, Buffalo turned the ball over and Douglas sped up the floor in transition.

Cecil saw some space between the defender and pulled up from long range, sinking the three-point shot to trim the lead to five points with just under five minutes left to play. The following possession, Larson pump faked a shot from behind the arc and found Kenyion Townsend wide open in the paint for an easy lay up to make it 52-49. Douglas was on a 20-5 run and the volume inside the Douglas Rec Center gymnasium was beginning to turn up.

A short time later, trailing 54-51, Larson pulled up from three-point land once more and drained the shot to tie the game. The Bearcat bench erupted as the Bison looked around, mystified by the disappearance of their lead.

Then, after Buffalo retook the lead with a free throw, Cecil caught a pass at the top of the key from Townsend and drained another big time three-point shot to give Douglas a 57-54 lead. And with the game tied and just seconds remaining on the clock, Cecil found the basket for a third time on a lay up for the game-winner.

“He’s not afraid to take the big shot when it’s needed,” head coach Chase Plumb said of Cecil. “It doesn’t matter if he’s missed three or four shots in a row, he’s got that shooter’s mentality. He made some huge plays for us down the stretch.”

Townsend finished with a game-high 21 points and was followed by Larson who finished with 11 points and 3 assists. Cecil tallied 10 points, most of which came in the fourth quarter, and Matthew Underwood contributed 8 points and 15 rebounds in a winning cause.

Like Cecil, Townsend proved to be clutch for Douglas throughout Friday’s win, especially in the final minutes.

“He was big for us all game,” Plumb said. “It was probably his best of the season. He played so much bigger than he is inside and finished over bigger players. He looked like a true stud when it mattered the most, it was great to see.”

If the Bearcats took anything away from the win, it’s that they can contend with the best of the best. They had already recognized that fact, especially after stunning a tough Wheatland team a week earlier in similar fashion.

Offseason Outlook: Broncos will have new kicker, and maybe a new punter in 2020

But a win over the top-ranked team in the state carries a bit more weight with it.

“If we come to play we’re a competitive team,” Cecil said. “We could also show up and lose to anyone as well if we’re not ready to play. This win showed us that we can beat anybody.”

“Buffalo is a good team, they’re number one for a reason,” Plumb added. “It was nice to see things come full circle after taking a beating during the second half in Buffalo. This is a nice confidence booster that we can beat anyone in the state.”

No team ever enjoys having to play from behind, but the Bearcats have shown twice now in three games that they aren’t fazed by the situation.

If anything, they thrive on it.

“We practice those same situations all the time in practice,” Cecil noted. “Coach Plumb always stays calm and doesn’t freak out. We never give up and as a team we all work together and find a way to come back and win.”

For Cecil, he couldn’t have asked for anything better on senior night.

“Coming back from 11 points and beating the number one ranked team . . . it was one of the best feelings I’ve had in sports,” he said. “It was a good way to go out playing on our home court for the last time.”

The Bearcats now shift their focus to their final two games of the regular season.

They’ll travel to Newcastle (9-7, 2-2) Friday to take on the Dogies in hopes of avenging a 60-48 loss on their home floor last month. Then they’ll travel to Thermopolis (4-15, 0-3) on Saturday to cap off the regular season against the struggling Bobcats.

Douglas continues to get outworked on the boards and that’s something Plumb said will be the team’s focus as they prepare this week and heading into the regional tournament next weekend. The Bearcats will also look to stress the importance of every possession.

“Each possession is going to get tougher and tougher,” Plumb said.