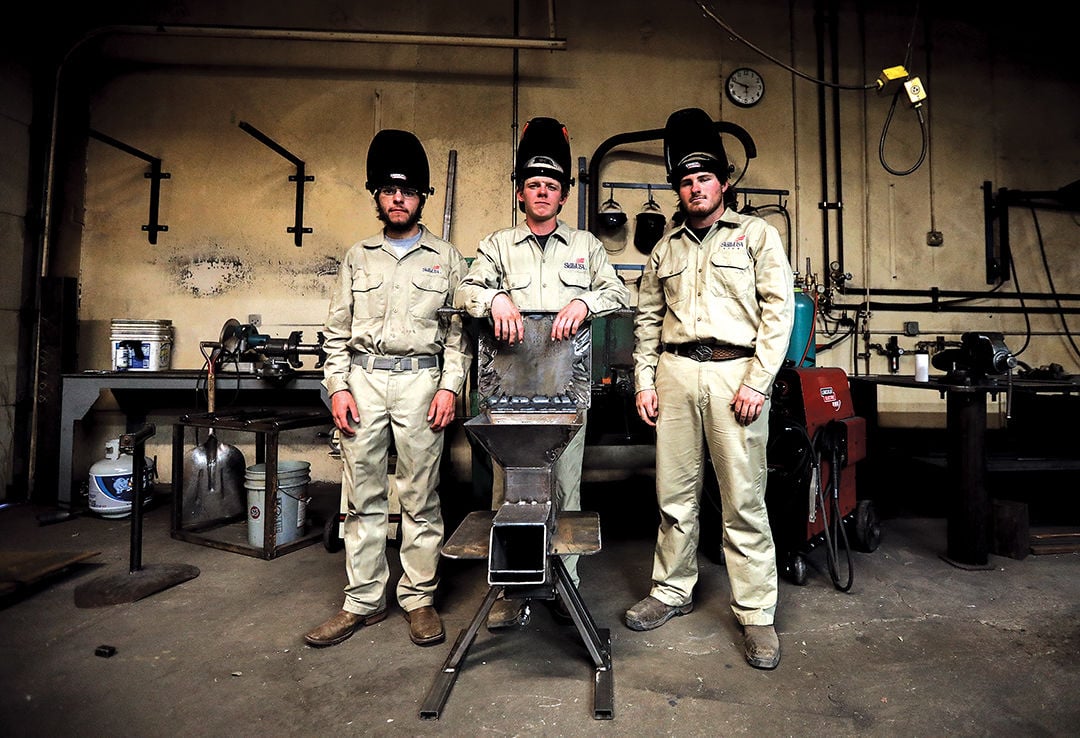 Douglas High School juniors Trevor Sorg (from left), Dalton Chapman and Kyle Parks recently earned top honors as a Welding Fabrication team at the SkillsUSA National Leadership Conference in Louisville, Kentucky for their work in constructing a rocket stove, among other tests and skill checks. 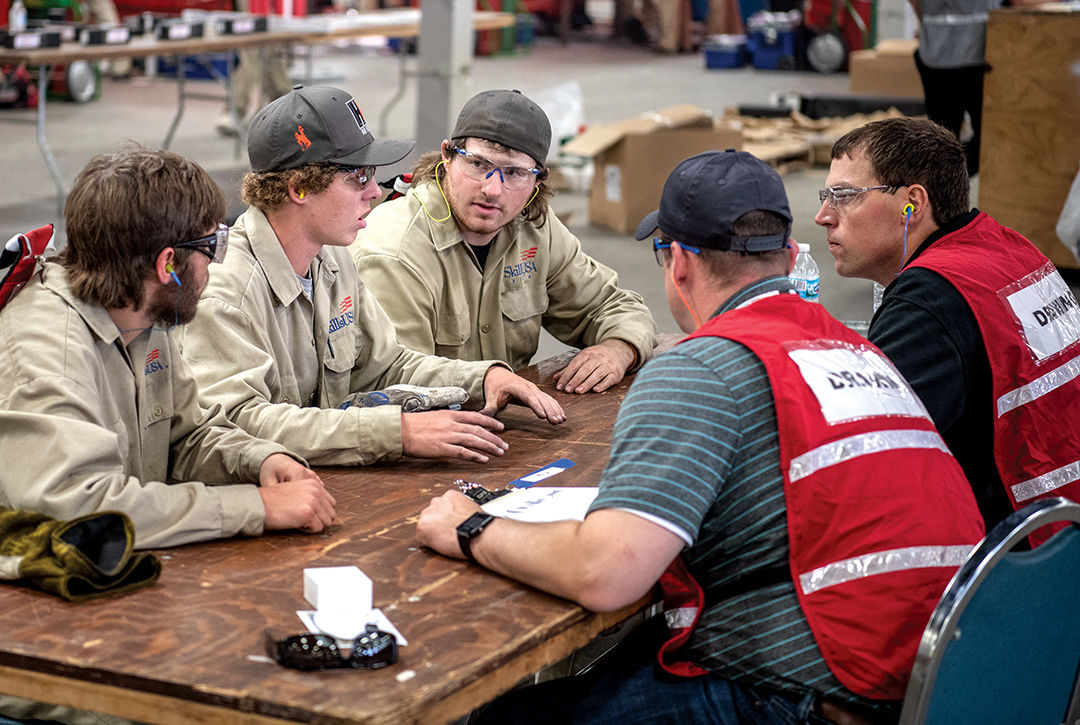 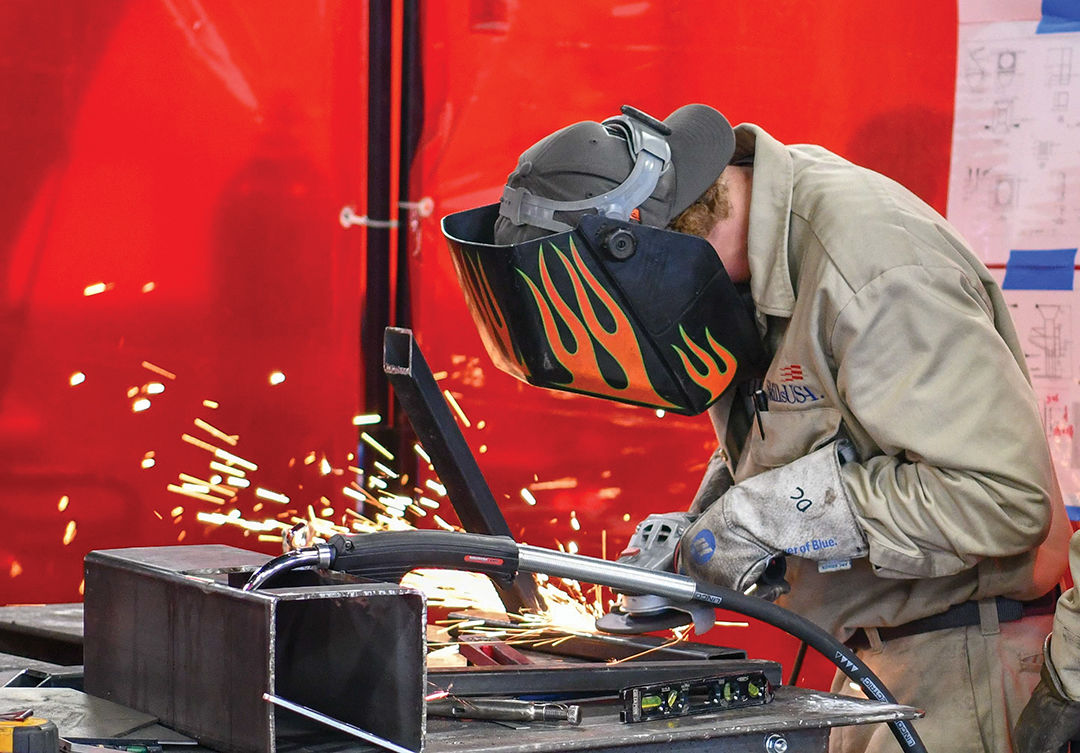 Dalton Chapman cleans up a weld by using an angle grinder at the National Leadership Conference in Louisville, Kentucky.

Douglas High School juniors Trevor Sorg (from left), Dalton Chapman and Kyle Parks recently earned top honors as a Welding Fabrication team at the SkillsUSA National Leadership Conference in Louisville, Kentucky for their work in constructing a rocket stove, among other tests and skill checks.

Dalton Chapman cleans up a weld by using an angle grinder at the National Leadership Conference in Louisville, Kentucky.

Following their top finish at the Wyoming SkillsUSA competition in April, the Douglas High School welding fabrication team knew there was still work to be done.

They set a high bar for themselves by winning gold at the state level. But the chance to become national champions was well within reach. So, every Saturday for five weeks prior to the 54th annual SkillsUSA National Leadership and Skills Conference in Louisville, Kentucky, Dalton Chapman, Kyle Parks and Trevor Sorg refined their welding skills at DHS, patiently awaiting their opportunity.

Their hard work paid off over the course of four days, June 25-29, as they earned top honors, winning gold overall.

“To go out there and do the thing that we’ve been working our butts off for and win gold. . . it was a great feeling,” Chapman said. “To hear our names called and to go up on stage and represent Douglas and Wyoming, it felt good knowing that all of our hard work paid off.”

The team learned on Tuesday, June 26, that they’d be building their design on Thursday, the final day of the competition. On the first day they presented their blueprints and resumes to the judges. On Wednesday, they were required to complete two written tests - a general welding knowledge test and a SkillsUSA test - the latter being used as a tiebreaker if needed.

Thursday was the all important day. Chapman, Parks and Sorg had six hours and 30 minutes to build a rocket stove. Having already completed the other two sections of the competition, it alleviated some of the pressure and allowed them to just focus on welding.

“Our nerves had settled by then,” Chapman said. “It gave us the chance to see what everyone else was building too.”

The clock was ticking toward six hours and 30 minutes. As they cleaned up their work space and put the finishing touches on their rocket stove, they couldn’t help but notice a few mistakes had been made. In modest fashion, they felt the mistakes would end up costing them. So, when their names were called as the top team in the nation on Friday, they were objectively surprised.

“We almost had to take a second glance at the screen when they announced the winners,” Parks said. “We couldn’t believe it.”

Trevor Sorg always looked up to the students who won gold at the SkillsUSA national competition. Now, the roles are switched.

For Chapman, Parks and Sorg, the award is much more than just an added achievement on their resumes. It’s an opportunity to put the DHS welding program on the map but to also bring light to SkillsUSA and the many excellent opportunities that are offered to students.

“I hope that this will help introduce more people to SkillsUSA and all of the different things that you can do,” Sorg said. He added, “and even to help keep welding and SkillsUSA alive in Douglas.”

Welding at DHS has long been a major source of pride and in the community, with many national honors having already highlighted years of achievements.

Steven M. Sipple: How will Moos be judged as Husker AD? The pandemic will have large say

And with recent cuts eliminating core classes for the 2018-2019 school year, it seems only fitting that Chapman, Parks and Sorg are in a position to keep the focus on the program’s successes.

“A lot of the younger kids in the welding program look up to us,” Parks said. “They want to be doing what we are doing and we hope this will help them do that.”

“This is a chance to show everybody that it’s a career opportunity,” Chapman added. “Whether you’re good at drawing or whatever it may be, it’s such an open career. It’s a valuable skill set to have.”

Chapman, Parks and Sorg will be the first to tell you that winning gold at the state competition and now at the national level, would not have been possible without the help of welding shop instructor, Nathan Adels.

“Mr. Adels has helped me immensely,” Sorg said. “I couldn’t weld at all when I came into high school . . . I didn’t even know what it was all about. I know we wouldn’t be where we are if it wasn’t for him.”

“Without him, we wouldn’t be having this conservation,” Parks added.

Adels has devoted much of his time on weekends and extra time during the week to help welders at DHS reach their full potential. He’s had a profound impact on them.

And with classes being cut at DHS this upcoming year, he will travel to Glenrock High School to teach additional welding courses in hopes of continuing to spread his knowledge to future welders.

“He’s really gone out of his way to help us with everything,” Chapman said. “I hope he continues to do what he does because I’m sure there will be many more advanced welders who come out of his shop thanks to him.”

The three national champion welders would also like to thank Ryan Jimmerson who played an integral role in their blueprint designs for both the state and national competitions. They would also like to thank Megan Adels, Lane McGuire, Brandon Edwards, Blake Parks, Don Blackburn and Tony Hiser of Peabody Energy, the entire SkillsUSA chapter and anyone else who may have provided a push along the way.

Thanks also goes to Peabody Energy for sponsoring travel and Kale Shelver who was a member of the state winning team and helped them reach nationals. And, of course, the behind the scene supporters.