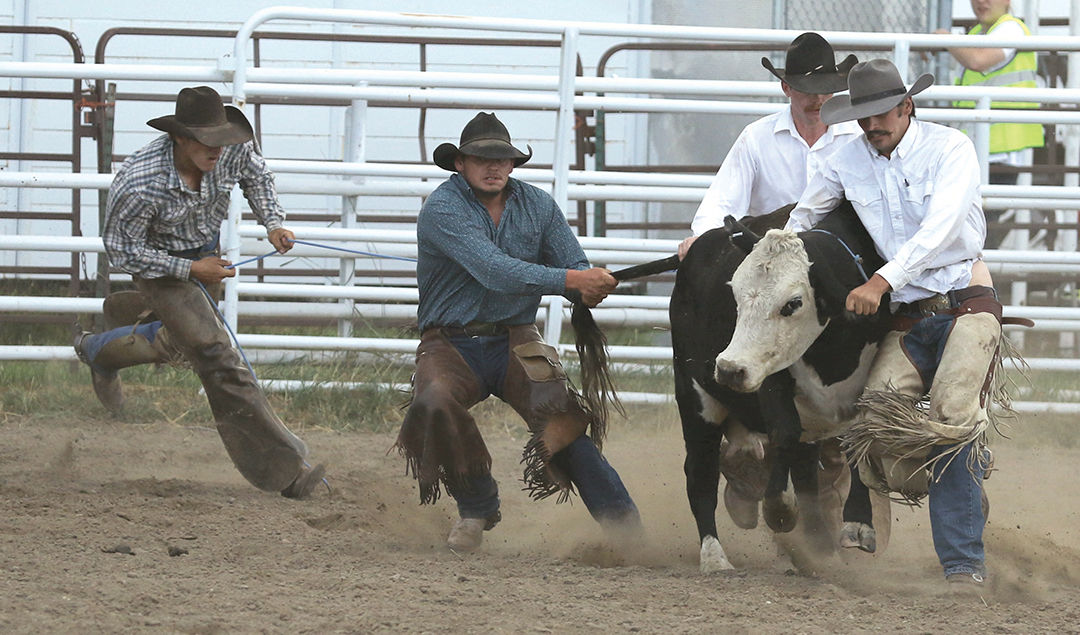 The 2 Bar Crew tackles their wild cow to the ground during the wild cow milking. It took all four members of the team to bring it to the ground. 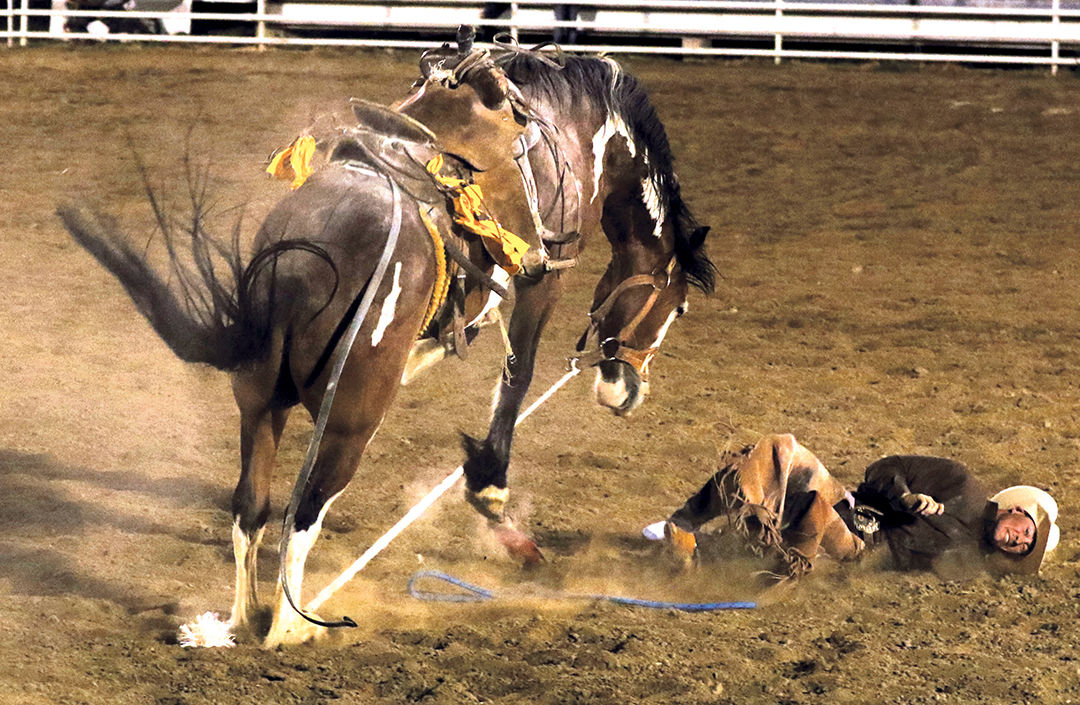 Lane Hageman of Boot Hill 7/Hageman Ranch after getting launched off his bronc. The timer’s whistle was blown as soon as Hageman hit the ground, giving him a 0 score. 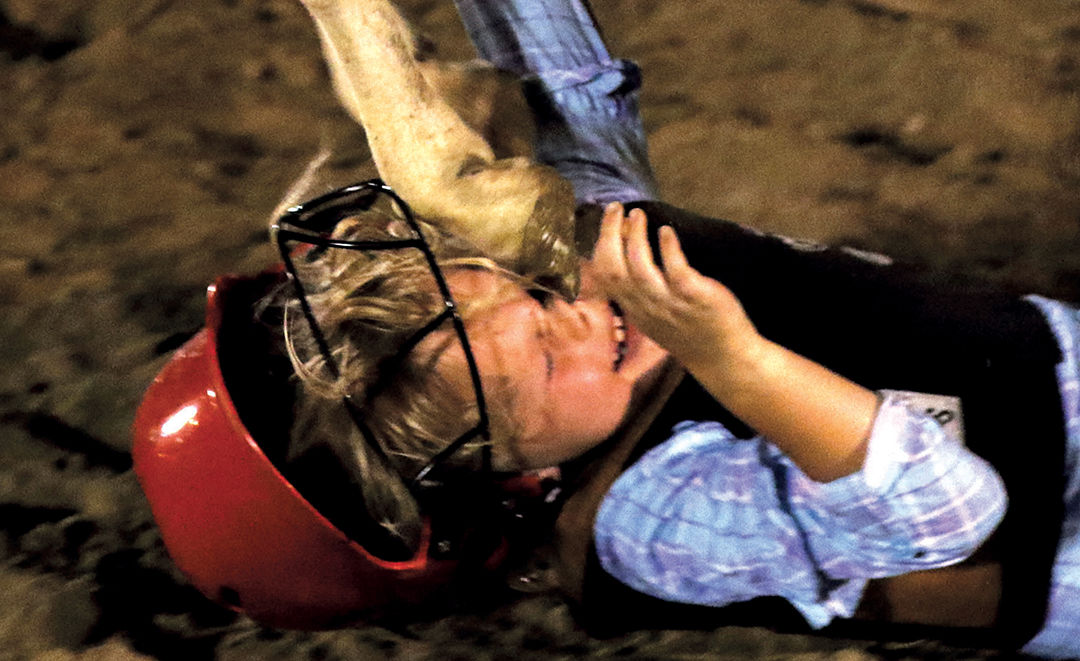 Harper Asmus takes a hoof to the face during the ranch rodeo mutton bustin’.

The 2 Bar Crew tackles their wild cow to the ground during the wild cow milking. It took all four members of the team to bring it to the ground.

Lane Hageman of Boot Hill 7/Hageman Ranch after getting launched off his bronc. The timer’s whistle was blown as soon as Hageman hit the ground, giving him a 0 score.

Harper Asmus takes a hoof to the face during the ranch rodeo mutton bustin’.

No matter how much training they’ve done, no rancher can truly prepare themselves for a ranch rodeo. No herd of cattle will form the same way again and no bronc will buck the same way twice.

It’s a lesson each and every rider competing at the Wyoming State Fair Ranch Rodeo has known for years, but it affirmed itself at the packed Ford Grandstand Arena Aug. 10. Seven teams from across Wyoming met to face off in four events, all in the hopes of qualifying for the Western States Ranch Rodeo Association National Finals.

Each team qualified for the ranch rodeo after winning one of the previous county rodeos. The night started with Brandon Moody atop one of the provided broncs, and it ended with him on top of the world. In addition to his solo ride on the bronc, Moody is a member of the Renegade Ranch. Once all the points were tabulated, it was the Renegade Ranch that came away with the victory and Moody won the halter for the highest scoring bronc ride.

“We had some rough luck and some good luck, but it all worked out,” Moody said.

To keep the balance of the event schedule, only three bronc riders went to open the rodeo. The night was broken up into four event post-bronc riding, with another spell of it during the middle, and ending with the kids mutton bustin’. The seven rancher teams competed in team doctoring, team branding and wild cow milking.

The highlight of the night in the team doctoring, an event that everyone finished, was courtesy of the Broken Arrow Livestock Ranch. They pulled cattle number eight out of the herd and across the arena in just 34.91 seconds—the second closest team was Boothill 7/Hageman Ranch and it took them barely over one minute to get their cow out of the herd.

Both the crowd and the other ranchers burst out in cheers for the Broken Arrow team’s unstoppable sorting time. Everyone was able to also finish the wild cow milking. The best time of the day for the milking went to Renegade Ranch.

They caught the cow, get it down and extract the milk into the beer bottle in only 40.65 seconds. With the sun inching closer to the horizon, the light poked barely through the slats in the Grandstand Arena roof. Clouds of dust and dirt coated the arena, as well as the first rows of the crowd.

These conditions gave way to the most dangerous team event of the rodeo, the team trailering. With a trailer set up at the far side of the arena from the herd of cattle, spectators were told to stay far away from the ring. It didn’t take long for the precaution to be valuable as one of the sequestered cows came bursting through and crashed into the guardrails.

Two teams were unable to finish it in the allotted time with Renegade once again claiming the top spot at 29.43 seconds. To say nothing of the actual difficulty in the ring, the hardest team event of the night for finishing was the team branding.

FIRST PITCHES: To inform and entertain ... but maybe not in that order

Huskers face a different life after returning for workouts

Only three teams branded their cows in the two minutes allowed—with the top two finishers separated by the smallest of margins. ZN Ranch/TA Ranch got first place with 1:53:28 and Broken Arrow came in second place with 1:53:30.

Just two one-hundredths of one second separated them with Renegade Ranch getting third, five seconds slower than the top duo. No matter who was riding, there was camaraderie in the wings. The different ranchers spent all the time they weren’t ring just waking around, talking to each other and enjoying the atmosphere.

One of the scariest moments of the night for the crowd was during the second round of bronc riding when Mill Iron Spear Ranch’s Christian Buxton was launched off his horse, getting kneed in the head on the way to the ground. He sat still on the softened dirt as he was surrounded by both other riders and medical personal.

While the EMT’s worked with Buxton down on the ground, the dozen riders who leapt into the ring kept them safe from Buckskin Joe my hooting and hollering him away from the downed Buxton. Before Lane Hageman, the next rancher to take on the broncs, Buxton was already up and walking around behind the gates, barely shaken up from his fall.

Hageman also failed to score any points on his ride. Despite the notable aroma and cloud of baby powder that came rocketing out of the chute with him, Hageman held on until the absolute last second. As he crashed to the ground, the timer’s whistle was blown from the announcer’s booth.

Among the crowd of kids closely watching the bronc riders was Cody Yeager of Douglas. Yeager, along with his brother Colton, signed up to compete in the mutton bustin’ competition which was held right after the rodeo prizes and winners were announced. Even with the main event technically over, the crowds stayed packed to watch the next generation of riders.

Cody had the best time of the day, winning the mutton bustin’ prize. While others were shaken off their sheep, Cody held firm well past when he should’ve been done. He was completely off the side of the sheep, but held his arms around the sheep’s neck, for several seconds until the sheep came crashing down on top of him.

He still has plenty of time until he gets there, but Cody said that he wants to be a bronc rider when he grows up. He gets to follow in the footsteps of the riders like Moody, Buxton and Hageman right along the ring where they rode just minutes prior.

As the crowd dispersed to either their cars or the adjacent beer garden, the lights lingered on over the arena. The ranch rodeo was done, but the State Fair had just begun.