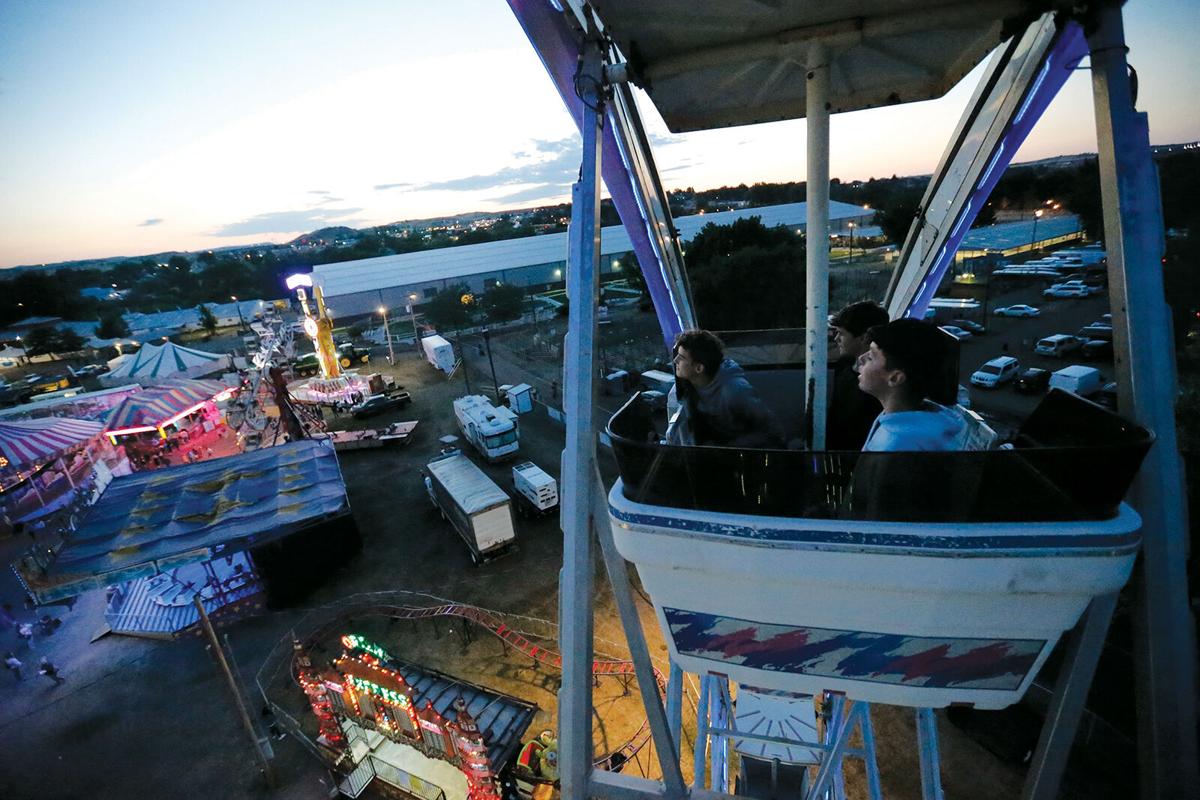 Bryson Castleberry, (left) Ryan Vialpando and Braxton Spence look from the ferris wheel toward the carnival below Friday night. 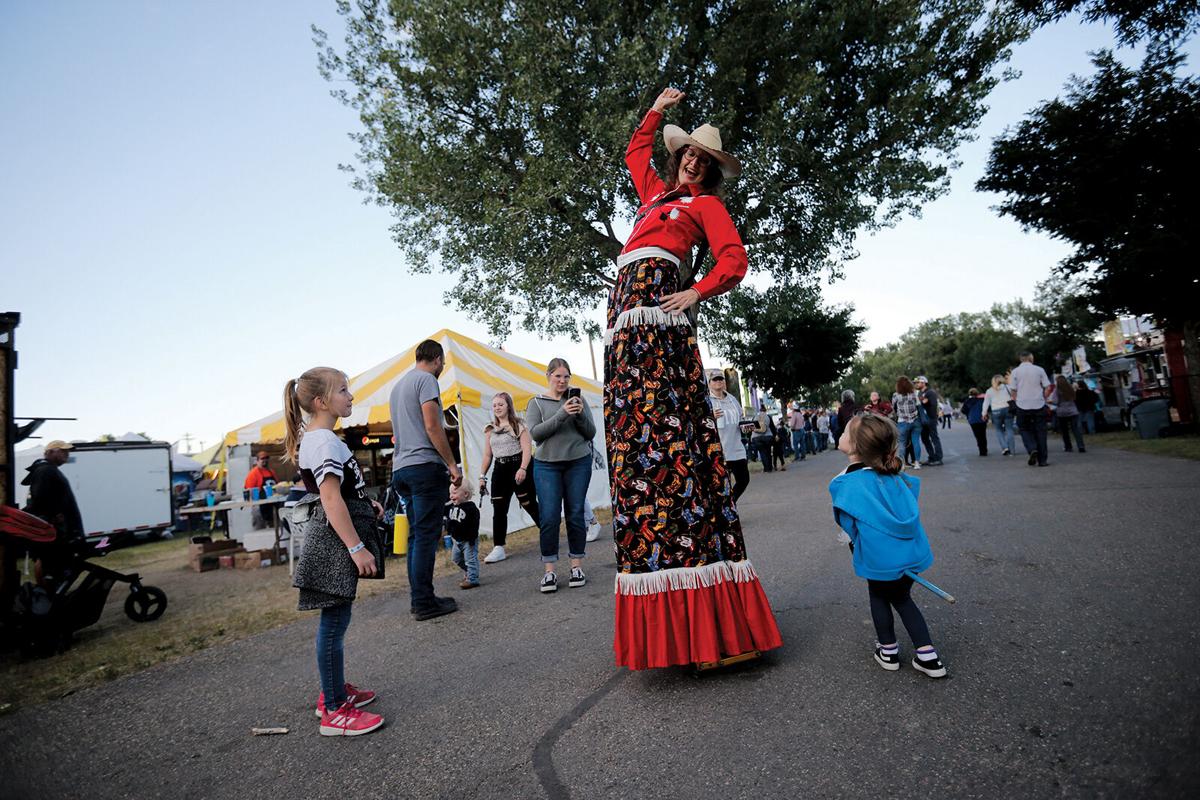 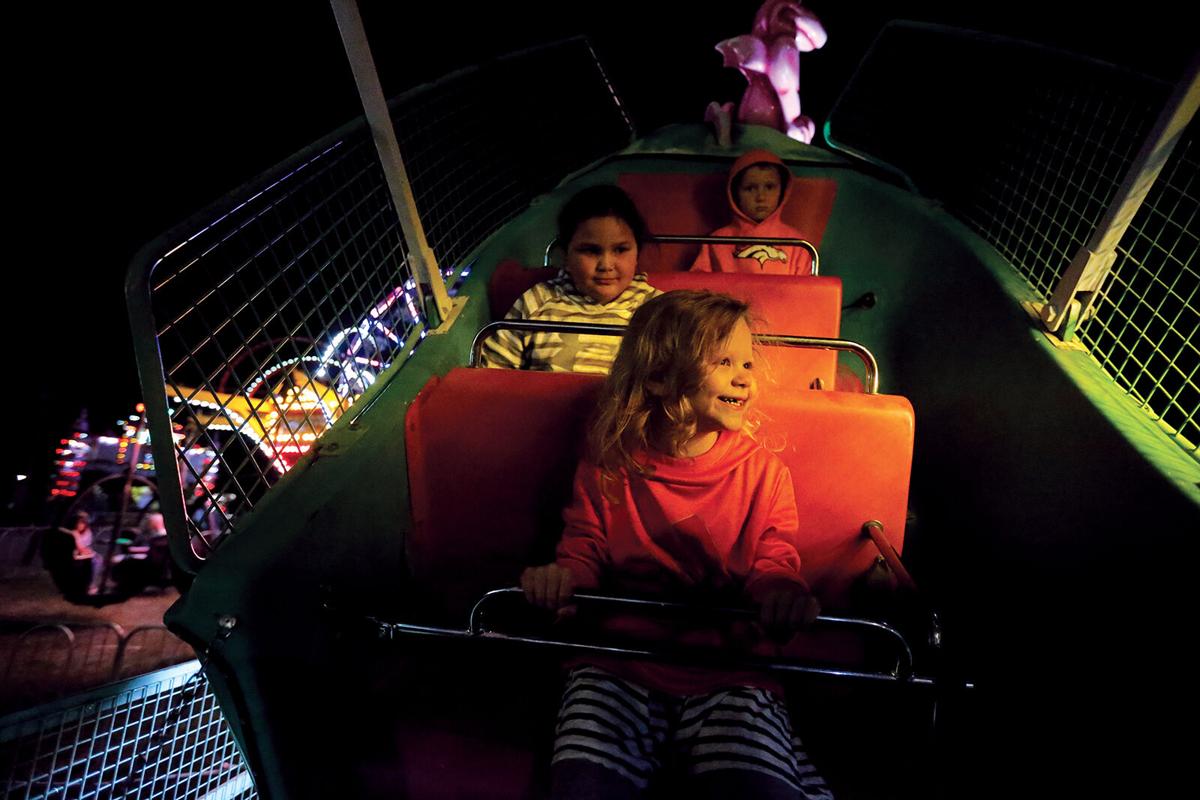 Harbor Ames,4, enjoys a riveting ride at the carnival.

Bryson Castleberry, (left) Ryan Vialpando and Braxton Spence look from the ferris wheel toward the carnival below Friday night.

Harbor Ames,4, enjoys a riveting ride at the carnival.

After a week of lights, action and laughter, the 109th annual Wyoming State Fair ended Saturday.

WSF General Manager Courtny Conkle said she and her staff focused on diversifying and improving the experience this year, as they do every year. It seems to have worked as attendance rose by 16.8 percent from last year.

“We really want to respect the history and heritage (of the WSF) while still making it new and exciting every year,” Conkle said. “It’s an honor to be able to do so.”

The preliminary count admission totals for children and adults within a single day was 13,023, according to Conkle. The final number could climb higher, as the statistic doesn’t include numbers for the Pioneer Day for seniors and Military appreciation promotion days. It also doesn’t include folks who bought season passes or participants in the fair like vendors and entertainment.

In the spirit of improving the fair, the WSF office recruited 12 more vendors than last year to make a total of 83.

“We really tried to diversify the vendors,” Conkle said.

And considering various vendors peddled everything from western apparel to unique knickknacks to exotic food, they did just that.

Along with several new vendors, the fair added Snowy’s Honky Tonk Bar in the Exhibit Hall, a petting zoo for Circle G Cowboy Church’s booth, and the Allure Boutique booth.

First, they featured a chainsaw-carving show each day, a magician act, and the Play With Gravity Motocross show.

“Historically,” Conkle said, “we had a motocross show in the grandstands. And we had a lot of families interested in motor sports so we wanted to offer something people could access without an additional fee.”

Billboard Hot Country Songs Chart artist Walker Hayes was scheduled to perform at the grandstands Friday night, but his show was cancelled when one of his band mates tested positive for COVID-19, according to Conkle.

“All in all,” Conkle said, “having that kind of cancellation and still seeing a (16.8) percent increase was quite the reward.”

Saturday morning, the WSF Parade roared through downtown Douglas, with over 80 entries.

'It was a mistake': US military general on Kabul drone strike

Chuck Brooks, who rolled down Center Street with ponies and a stagecoach, won the Wagon/Equine category. Larry and Julie Gomez won the Collector Cars category, the Wyoming Cowboy Challenge Academy won the youth category and the Calliope Clown Unit of the Korein Shrine won the Service/Non-profit category. In the Adult/General category, Bill Foy took home first place by showcasing a brilliant, massive sculpture of Steamboat, the iconic bucking horse that serves as the logo for the University of Wyoming.

The demolition derby Saturday night, which was put on by the Douglas Volunteer Fire Department (DVFD) and sponsored by several businesses both local and statewide, turned out to be the most widely-attended event of the fair.

“We actually had security ask us to make an announcement to the crowd to make room for extra people,” DVFD Lt. Pat Evans said. “At one point, there was 75 to 100 people under the grandstands without a place to sit.”

The derby featured four different events: the Chain Up class, the Limited Weld class, the Power Wheels class and the Half Car class.

The Chain up class included 7 vehicles, and was won by Eric Redeabough of Torrington.

The Half Car class had eight vehicles in it and had two drivers per entry. Jason Walters and Steven Dyer of Douglas took home the first-place trophy.

In the Limited Weld class, which had 22 entries, Robert Laing of Casper won.

For the Power Wheels class, which consisted of drivers ages four to nine, Paul Croteau of Douglas took home the gold.

In all the other classes, trophies and cash prizes were awarded to the top placers.

The trophies, fabricated by Wilson Machine LLC in Douglas, were in memory of Billy Cathcart, a long-time DVFD fireman member of the Emergency Medical Service who passed away in September of 2017.

Dennis Switzer of KKTY radio, who announced the derby, whole-heartedly praised Cathcart and the bravery of the DVFD members during the derby.

All the money raised during the derby went toward the DVFD’s Burn Fund, Community assistance fundraiser and multiple scholarships they award to Douglas High School graduates.

“He was the head judge, he and I started the derby committee,” Evans said of Cathcart. “All the derby drivers knew him.”

Conkle said she was very pleased with the state fair’s turnout this year.

“We’re just going to keep trying to make the fair better and better every year.”