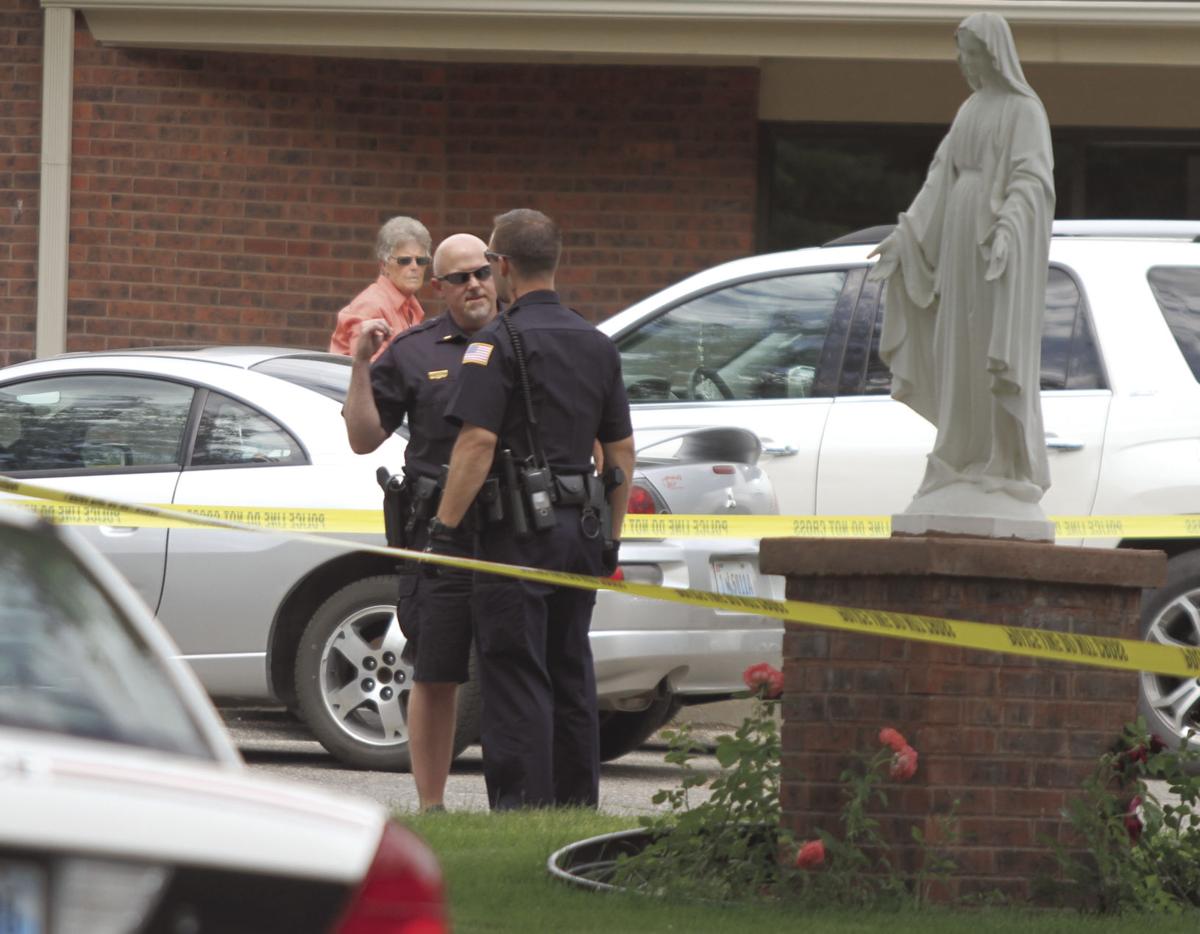 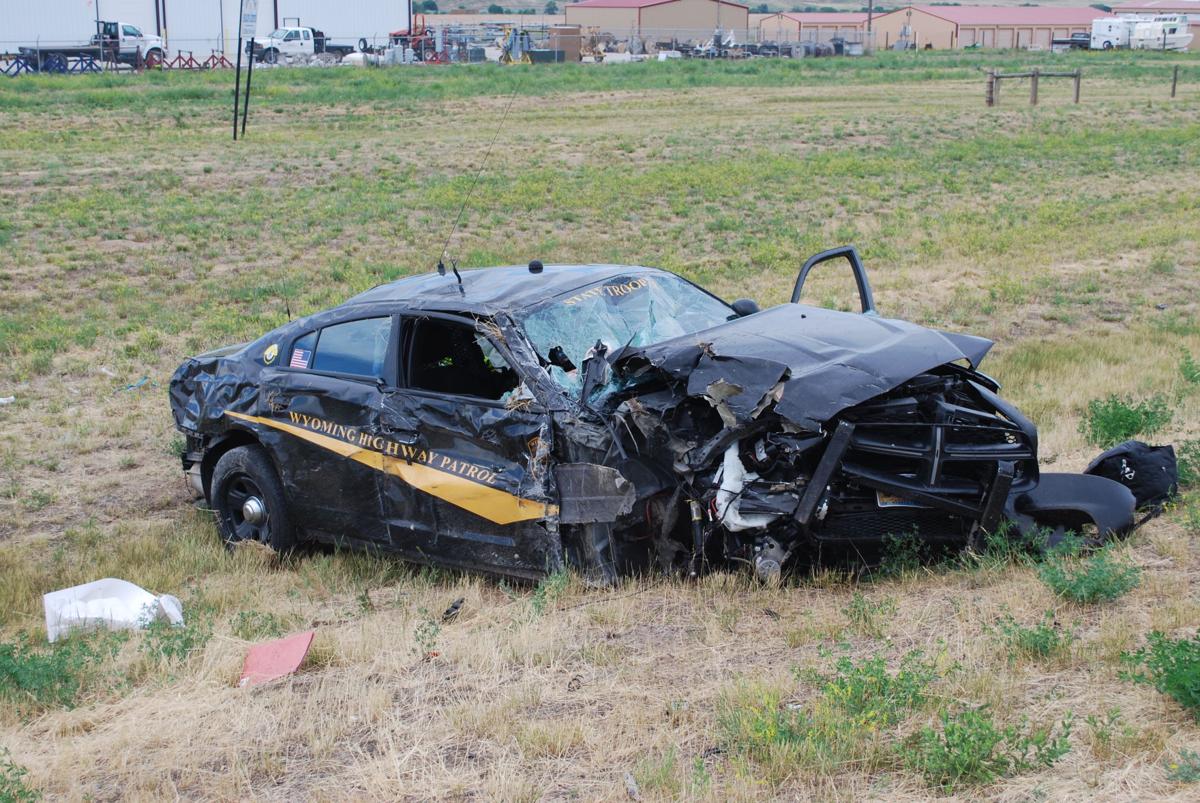 A Wyoming Highway patrolman was involved in a two-person crash while driving to the officer-involved shooting in Douglas on Thursday.

A Wyoming Highway patrolman was involved in a two-person crash while driving to the officer-involved shooting in Douglas on Thursday.

July 1, 2016 • 2:26 p.m.
Here is a statement from the Catholic Diocese of Cheyenne about the shooting that took place outside of a church yesterday afternoon:
"We are saddened by the untimely loss of life in any circumstance. But the fact that this happened following a funeral liturgy when friends and family members were already grieving and outside of a house of worship, where people seek solace, makes this situation all the more troubling.
"Even in the face of growing violence in our culture, we expect as a civil society and encourage as a community of faith, that we make a stronger commitment to peaceful resolutions and enforcement of laws and a demonstration of greater respect for human life and the common good," the press release said.

“On Thursday, June 30, Deputy U.S. Marshals were involved in a line-of-duty shooting incident in Converse County, WY, while attempting to apprehend fugitive Jasen Scott Ramirez, who was wanted on drug charges. During the attempted arrest, Ramirez was shot. He was immediately transported to a local medical facility where he later died of his injuries. No law enforcement officers were injured. The Wyoming Division of Criminal Investigations is the lead investigative agency for this incident. As a matter of policy, the Marshals Service will not release the names of deputy marshals involved in shooting incidents until the conclusion of all investigations surrounding the incident. As this is an ongoing investigation, we cannot provide further comment.”

UPDATE: The Converse County Sheriff’s Office responded to the 300 block of North 5th Street in Douglas, after receiving a call for assistance regarding an officer involved shooting from agents with the United States Marshals who were serving a federal arrest warrant.

Upon arrival, Deputies and Douglas Police Department Officers began rendering aid to a male subject who was lying on the ground and was unconscious. Douglas EMS arrived and transported the male subject to the Converse County Memorial Hospital. Jasen Scott Ramirez, 44, a Colorado resident, was later pronounced deceased.

During this unfortunate incident, an unconfirmed threat was made against law enforcement, prompting the County Courthouse, City Hall, and the Hospital to be placed on lockdown until the threat was investigated.

Any further inquiries should be addressed with the United States Marshals Office.

UPDATE: The Wyoming Highway Patrol officer that was involved in the crash in Glenrock yesterday has been identified as Trooper Joel Eldred.

Eldred, a 12-year veteran of the WHP, is expected to be released from the hospital in Casper today and make a full recovery. The WHP said seat beat use, air bags and prisoner transport safety cage in the vehicle and his protective vest helped Eldred avoid serious injury after his cruiser rolled "at minimum" four times on US HWY 20/26.

The jeep that was hit during the crash was driven by 49-year-old Jamestown, Louisiana, resident Robin Belgard.

Belgard was treated for injuries yesterday in Casper and was released.

UPDATE: The officer involved in yesterday's shooting was a U.S. Marshal, according to Converse County Attorney Quentin Richardson. The Department of Criminal Investigation (DCI) is investigating the officer-involved incident and will hand over its findings to the county attorney when the investigation is complete.

A man in his mid-40s was shot and killed by law enforcement following his father's funeral outside of a church Thursday afternoon, according to local police and witnesses at the scene.

15-cent fuel tax increase to be considered by Legislature

The man, who family members identified as Scott Ramirez, was shot and killed in the parking lot of the St. James Catholic Church in Douglas at approximately 3 p.m., prompting officials to place the city on lockdown.

Ramirez' cousin, who asked not to be named, told the Budget that Ramirez was confirmed dead about 30 minutes after the shooting in the emergency room at Memorial Hospital of Converse County.

Following the incident, hospital officials, before hearing the patient's name, would not provide any information. Officials said that it was "against the law" to give patient status updates.

The Douglas Police Department confirmed that it was an officer-involved shooting, but would not say which department or agency was involved. Witnesses said the agents were undercover.

A spokesman for the Douglas Police Department said investigators were on their way to the scene at around 3:30 p.m.

According to friends and family, the shooting occurred following the funeral of Ramirez' father, Joe Ramirez, who died last week. Family and close friends said that the two were "incredibly close."

The funeral started at 1 p.m.

Reneil Cisneros, a close family friend who lives in Casper who attended the funeral, said that she spotted the agents when she arrived. She arrived late and said there were three individuals parked near the church who looked out of place.

When she entered, she said she took a seat in the back. During the service, Ramirez sat near the front sobbing. She said he was too upset to take communion.

Following the funeral, she saw the agents again. She said she was getting ready to go over and talk to Ramirez and give him a hug, but then she heard shots, about seven of them.

She said she couldn't process what was happening.

She looked over and saw him leaning on the car door. It looked like he was getting into the passenger side when he was shot, she said. She said he had been shocked with a stun gun, too. He appeared lifeless.

She estimated there to have been between 50 and 75 people present.

Family members were distraught at the scene.

"That was my dad!" Cisneros remembered Ramirez' son, who's in his 20s, saying.

"Why would you do that?" she remembered another scream.

"Get an ambulance!" yelled another.

Cisneros couldn't make sense of the incident on Thursday, either.

"He was a friend to everyone," she said, adding that he was "goofy" and liked to "joke around."

She said he had run into trouble with the law, had served time in prison recently, but that "he was a good guy, a sweet heart." She said he was trying to get his life together. He had a brother and a sister.

The Budget corroborated many of the details with six family members and friends who were present for the funeral, most of whom did not want to be named.

Family members said Ramirez had warrants out for his arrest, but that he was unarmed and had nothing in his hands at the time of the shooting.

Law enforcement did not confirm any of the family member's statements.

At the time of the officer-involved shooting, a Wyoming Highway Patrol trooper was heading to the scene in Douglas when he crashed with another vehicle around Glenrock, according to Sgt. David Wagener, a WHP spokesman.

Check back for updates...

Jason Scott Ramirez was killed by U.S. marshals serving a warrant on Thursday.

Jason Scott Ramirez, 44, of Colorado, was shot and killed by U.S. marshals on Thursday outside of a church in Douglas.

When Jasen Scott Ramirez was killed by law enforcement outside of a church in Douglas last week, officials recovered two handguns and meth fro…

And obviously the cousin would be a very reliable and non-biased source. Just like your newspaper.

Killing people at a funeral? Douglas law enforcement at their finest!?

Yeah and the cops will investigate themselves and concluded they did nothing wrong.

US Marshalls never attempted to 'arrest' Scott! The US Marshalls shot & killed an unarmed man in the parking lot of a church at his father's funeral for NO REASON other than he was addicted to drugs! How is his addiction to drugs hurting anyone but himself? They killed a man because he was wanted for drugs?? Police Corruption needs stop! War on Drugs will NEVER be won! Stop this insanity before more innocent lives are lost!!

Any charges pending for the Trooper who caused the accident when he was rushing to respond? Apparently the Wyoming DCI, the Wyoming Crime Lab,Converse County Sheriff's Office, Douglas Police, Wyoming Highway Patrol, FBI, DEA, HSI, and Wyoming Game and Fish already assisting at the scene weren't enough? Thank God the woman he hit wasn't killed! Anyone else would be cited, but obviously Cops are Above The Law. They ARE THE LAW so the rules don't apply to them. WOW! Am I in America? I hope I wake up from this nightmare!

Trooper responding to an officer-involved shooting before the shooting even happened? That would be....premeditated murder!