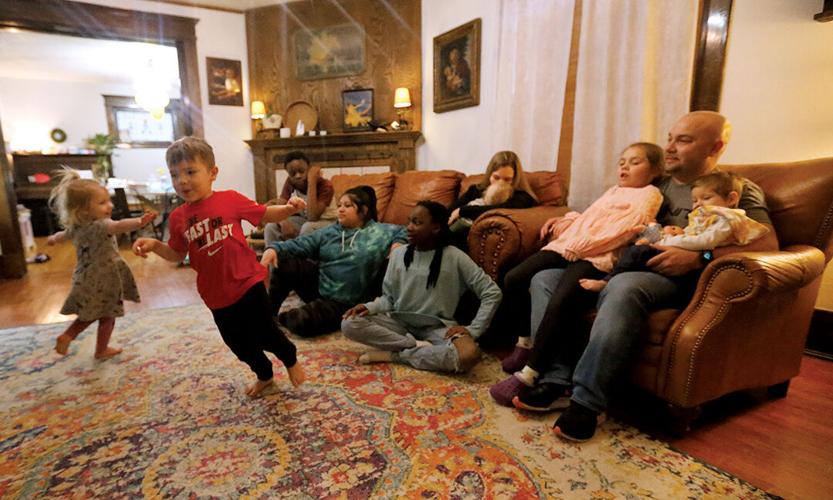 The Witbrod family, Micah, 12, (from left, on the couch), Lillian, 15, holding Ivy, 3, Thomas, 5, Rita, 11, Sarah, holding Caius, 1, in her lap, Olive, 8, Tony and Juniper, 2, cuddle and play in their living room Monday night during a rare 15 minutes that they’re not running one child or another to various after-school activities. 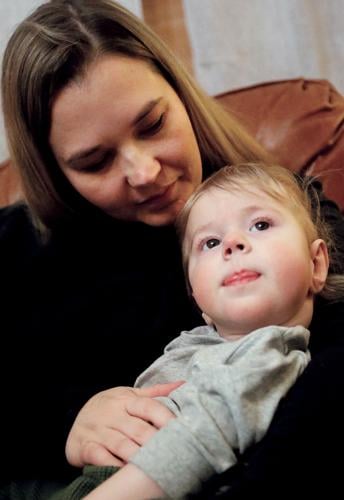 Sarah Witbrod holds her son, Caius, at the family’s home Monday night. Sarah, Tony, Caius and Juniper arrived back in the U.S. March 5 from adopting the two children in the Ukraine just as Russia invaded. 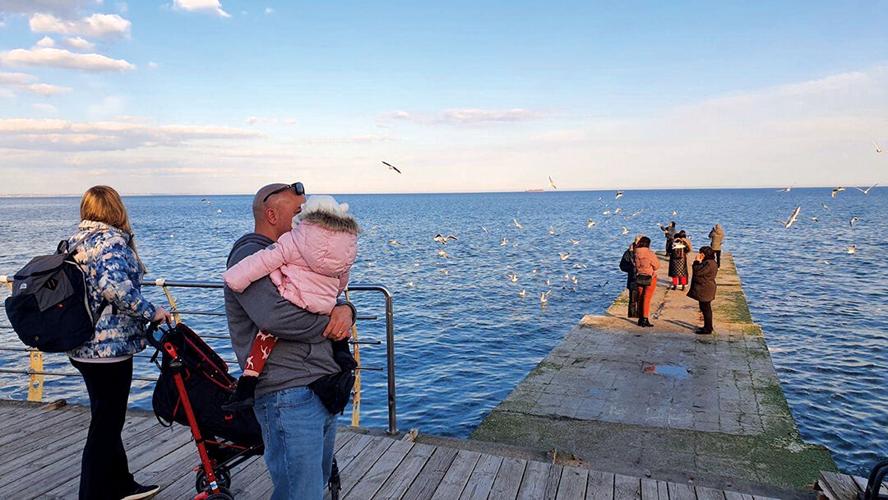 Sarah and Tony Witbrod, and their adopted Ukrainian children Juniper and Caius stand along the Black Sea a mere eight hours before Russia invaded Ukraine Feb. 23.

The Witbrod family, Micah, 12, (from left, on the couch), Lillian, 15, holding Ivy, 3, Thomas, 5, Rita, 11, Sarah, holding Caius, 1, in her lap, Olive, 8, Tony and Juniper, 2, cuddle and play in their living room Monday night during a rare 15 minutes that they’re not running one child or another to various after-school activities.

Sarah Witbrod holds her son, Caius, at the family’s home Monday night. Sarah, Tony, Caius and Juniper arrived back in the U.S. March 5 from adopting the two children in the Ukraine just as Russia invaded.

Sarah and Tony Witbrod, and their adopted Ukrainian children Juniper and Caius stand along the Black Sea a mere eight hours before Russia invaded Ukraine Feb. 23.

Even as the bombs began falling outside their hotel room at 3:30 in the morning, Tony and Sarah Witbrod knew they had done the right thing going to Ukraine.

“Because they’re my kids. Once you decide to adopt and are matched with a child or children – those are my kids. If your kids are in scary, bad place, you get them out. I think what we did is what any parent would do. Go get your kids and get them out,” Sarah said matter-of-factly.

That’s just what the Douglas couple did inside of 13 days. Sarah and Tony left Douglas Feb. 19 and arrived in Odessa, Ukraine late Feb. 20.

“We really upset the (U.S.) State Department. They knew we were going, we had filed our paperwork. They called us and advised us not to go to Ukraine. We said, ‘Those are our babies. We have to go. We have to get them out of there.’ We knew about the unrest. We had exit strategies in place if something went wrong, but Russia had been talking like that for a long time. Everyone in Ukraine was like, ‘It’s Putin, he does that. It’s not really anything to be too concerned about,’ because he’d been doing it for so long. He’d been massing troops on the border of Russia (and Ukraine) for years.”

Sarah’s and Tony’s minds were made up – they were going.

After landing in Odessa, Sarah and Tony drove to the orphanage in Izmail to see their newest bundles of joy – Caius Oleksandr, 15 months, and Juniper Yulia, 2.5 years. Both children have medical conditions, which is one of the reasons the Witbrods chose to adopt them – to give them a chance at growing up and having happy, full lives.

“Our son would have been put into a mental institution with no hope of getting out. He can’t sit, can’t hold his head up, but he’s so very joyful and sweet. Mentally, he is there. He interacts, coos, he loves everybody. Because he was born with deformed limbs, he didn’t have value in his country. At 35 years old he would be put into an old folks home. He would have been institutionalized for his entire life with zero hope of ever getting out,” she explained.

The next day (Feb. 22) they went to court to formalize the adoption. After nearly a year, Caius and Juniper officially joined the Witbrod family and were to head back to Douglas the next day.

The couple was woken at 3:30 a.m. by a bomb exploding nearby. Several more rang out.

“We chose to take the risk and go,” she said. “I’m really glad we did. They were the last two orphans who made it out of Ukraine.”

A Ukrainian couple, Alex and Yulia, had facilitated the adoption. That day, their role changed. They had to help the Witbrods get out of Ukraine. A lifelong bond had developed.

In fact, Tony and Sarah chose to give Juniper and Caius Alex’s and Yulia’s names as the kids’ middle names, to honor the couple who had done so much to help them.

Following the explosions, Alex and Yulia called the couple: “Pack your bags, we have to get out.”

Sarah, Tony and the kids went out into the streets, areas which just the night before had been busy, filled with people and nightlife.

“No one was out. It was empty,” Sarah marveled.

They had to get the babies’ passports, which up until then hadn’t been ready. They were rushed and picked up as the new family tried to flee.

“Alex said, ‘We’ll just drive along the border until we find a checkpoint without a lot of people waiting and that is going to let us in.’ People were leaving, evacuating. It was hard to find one (crossing) that wasn’t a 10-hour wait.”

Sarah said rows and rows of people with suitcases were just walking along the roads.

“Women were crying and hugging loved ones. The men weren’t allowed to leave. Our driver was granted permission to leave the country because he taking us out,” she said.

Most states have a school counselor shortage. Here's where they're needed the most

“We were given passage into and drove through Moldova. It just felt . . . so . . . surreal. Like we were in a dream. We were driving really, really fast through the Moldovian countryside on rocky unpaved roads. Refugee camps were just starting to go up. The invasion had just started when we left.

“Everything was moving really fast, but time was standing still. I don’t think you can fully comprehend what’s happening. We were driving in a convoy of military vehicles for a bit – so unreal. We kept thinking, ‘This is our next step, just take the next step.’

“We just did the next step to get us to safety.

“Putting that distance between us and what was happening,” she said once they arrived back in Douglas this week.

They got to the Romanian border at 10 p.m. that night.

“After we crossed into Romania, Alex said, ‘Now you can buy tickets to get out of Romania and go to Poland.’ I called and booked our tickets. There were four seats left on the plane; we got three,” Sarah’s voice was quiet, then trailed off.

Next, they stopped at a place that was being remodelled into a wedding complex, but they were allowed to stay there.

“The Romanian people were lovely, they helped us boil water for the bottles. We slept for . . . I don’t know, maybe an hour, then we got back into the car and started driving to Bucharest. We got a hotel room at 10 p.m., but we had to leave for the airport at 2 a.m.”

“We didn’t sleep. We had a moment. We changed the kids’ diapers and clothes, fed them a decent meal. They slept for a little bit.

“It was a really, really long day that never ended,” she sighed.

Feb. 26 the Witbrods landed in Warsaw, Poland, where they waited on the children’s medical clearances from the U.S. Embassy to be approved.

“By the time we got to Poland, we’d been up for over 70 hours. Yulia got us an apartment (for later). We didn’t have anywhere to go for the entire day, we stayed at the airport. We were super, super tired. Our 2.5-year old daughter was ready to move. We didn’t speak her language. It wasn’t the transition we would have liked for the babies . . . it was hard for her. Our whole focus was to get them out. We had everything we needed in our backpacks, but we would have left it all behind. We were prepared to leave everything. Suddenly, you don’t care about your favorite shirt at all. It shows you what’s really important.”

As the couple’s journey out of Ukraine began, they were flooded with messages of love from friends and family, including those in Douglas. Sarah said she went live on Facebook a few times, as she literally had her hands full and it was easier than trying to text everyone.

“It’s been good to be home. The other kids are really, really excited to have their new brother and sister home. It’s been so cool for our other kids to see how much goes into the process of adoption. How much you want them, how much you fight for them. Family came and saw them Sunday night. My mom watched three of our kids and Tony’s mom watched the other three while we were gone. We’re so glad to be home. Tony’s gone back to work and suddenly I’m here with eight kids. We need to get a schedule in place,” Sarah laughed Monday.

The Douglas community has taken good care of them, she noted.

“Douglas is a really special place to live. The school went out of their way to make sure our kids were being seen and loved on. They checked on us when they heard about the Russian invasion. They say it takes a village – Douglas is a really good village.”

And, Alex – who had been allowed to leave the Ukraine to drive the Witbrods out – could have stayed out. However, he returned to Ukraine to fight for his country, Sarah said.

“We check on him every day, to see if he’s logged on, anything. Just to make sure he is still there.”