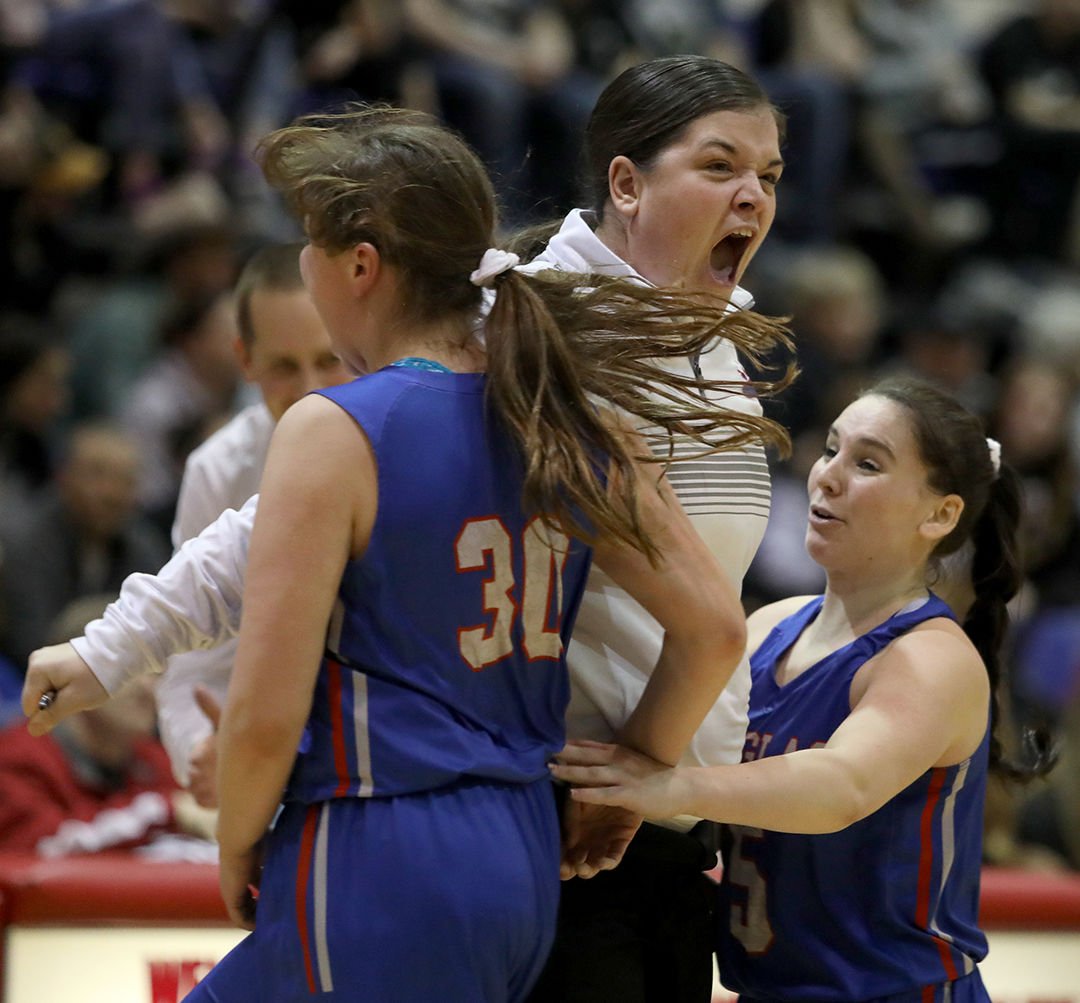 The anticipation of the crowd hung thick in the gym as the final seconds counted down, the Lady Cats behind Buffalo, 58-57.

Would this be the end of their perfect season?

Those last few seconds would race by until the ball makes it’s way to freshman Kam Townsend. She takes the shot. Time suddenly slows down as both Douglas and Buffalo fans hold their breath.

After a long drawn out battle for the ball, the game would come down to this final shot.

Before the ball could clear the net Douglas fans were leaping in the air, screaming with excitement.

The shot was good.

Townsend had done her job, and the Douglas Lady Cats were suddenly the 3A East champions with a 23-0 record.

The final score against the Lady Bison was 59-58.

The once in a lifetime moment didn’t seem to phase even the quiet freshman who saved the game. Townsend didn’t see it as the high-pressure shot that it was.

“I didn’t feel any pressure; I just played,” she said Monday. “I let it happen.”

The shot earned Townsend a lot of attention from fans as the game ended.

“A lot of people have talked to me about it right after,” she said with a grin. “But after that we just let it go and are moving on.”

The team has shifted focus to concentrate on the next hurdle at hand: The State Championship.

Her strategy for State is straightforward.

“We need to just play how we do and focus,” she said. “We will play our hardest.”

Townsend’s head may be looking toward the tough weekend she is facing at State, but she won’t soon forget the shot that won the tournament.

Cowboys kick off practice in Oxnard

Steven M. Sipple: Frost makes case that program has improved, but has the head coach?

“We had lots of chances to keep the lead, and we turned the ball over a bunch of times in the last couple minutes, which we have to not do,” coach Cody Helenbolt said Monday. “I was confident to the end that we were going to make something happen. I was a little bit worried, but I had faith in these girls that they were going to do something.”

His faith in his team ultimately paid off, but it wasn’t as smooth as he envisioned during his last moment with the team.

“When Buffalo was shooting free throws with 12 seconds left, we talked that if they missed, we were just going to go and not let them set up their defense. When we missed it my heart skipped a beat,” he said.

He didn’t call a timeout in that last push, as many coaches might have. He let the girls do their thing. To some, it was a bold move, but it paid off.

“Hayden Rhoades did a good job of getting close enough to the hoop that the shot was close enough we could rebound it and put it back in,” Helenbolt said with a smile. “It was really awesome.”

The awesome moment was relived by the girls Monday as they stretched for practice. It was obvious they were energized to keep the momentum going.

“I think we’re just excited They are all happy,” Helenbolt said. “We don’t get too high or too low with anything that happens. We are just happy to be playing an extra week and going to the state tournament is always special and fun.”

With the 3A East championship under their belt, they are wasting no time sitting on their heels but getting ready for the 3A State Tournament this weekend.

“We are taking it one game at a time,” Helenbolt said. “We have a tough game against Cody to start. We are going to do the same thing we did this weekend and take each one for what it is and play as hard as we can. We’ll let the chips fall where they fall.”

The team looks forward to the continued support the fans have given them this season, and Helenbolt hopes they make the trip to Casper for the tournament.

“The atmosphere on Saturday night was great. The support really helped us and made it a more special moment than it already was,” he said. “It was unbelievable. I had a lot of people tell me they had never seen the gym that packed before. Hopefully we get crowds for our games this weekend, and hopefully, we can play hard and do the best we can do.”

How do you grade Nebraska's hire of Trev Alberts as athletic director?