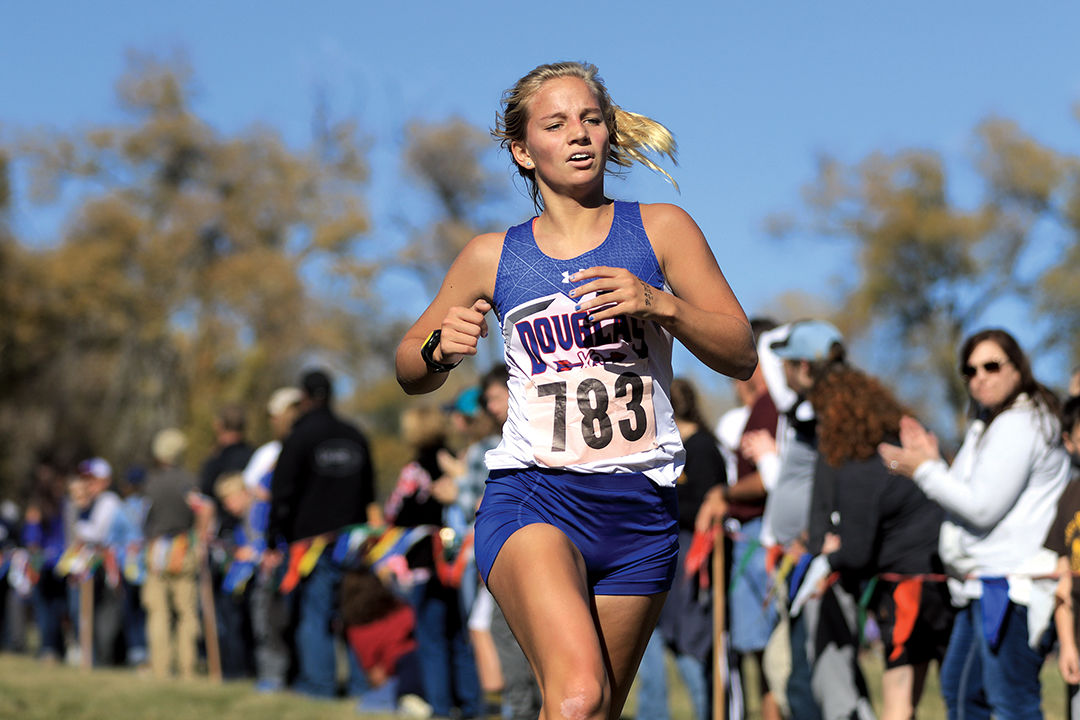 Douglas senior Jaylynn Boe exhaustedly runs toward the finish line during the 3A girls championship race. She finished in 23rd with a time of 21:03 to lead the Lady Bearcats. 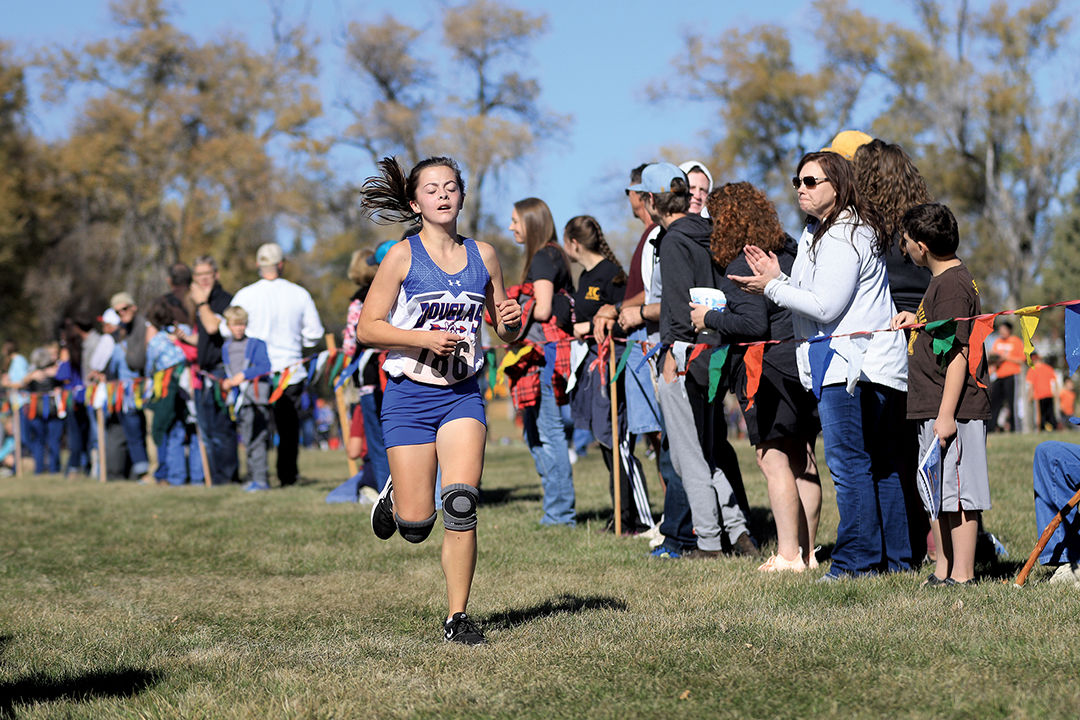 Freshman Lucie Holt fights through exhaustion and sweat as she runs down the final stretch of the 3A girls championship race. 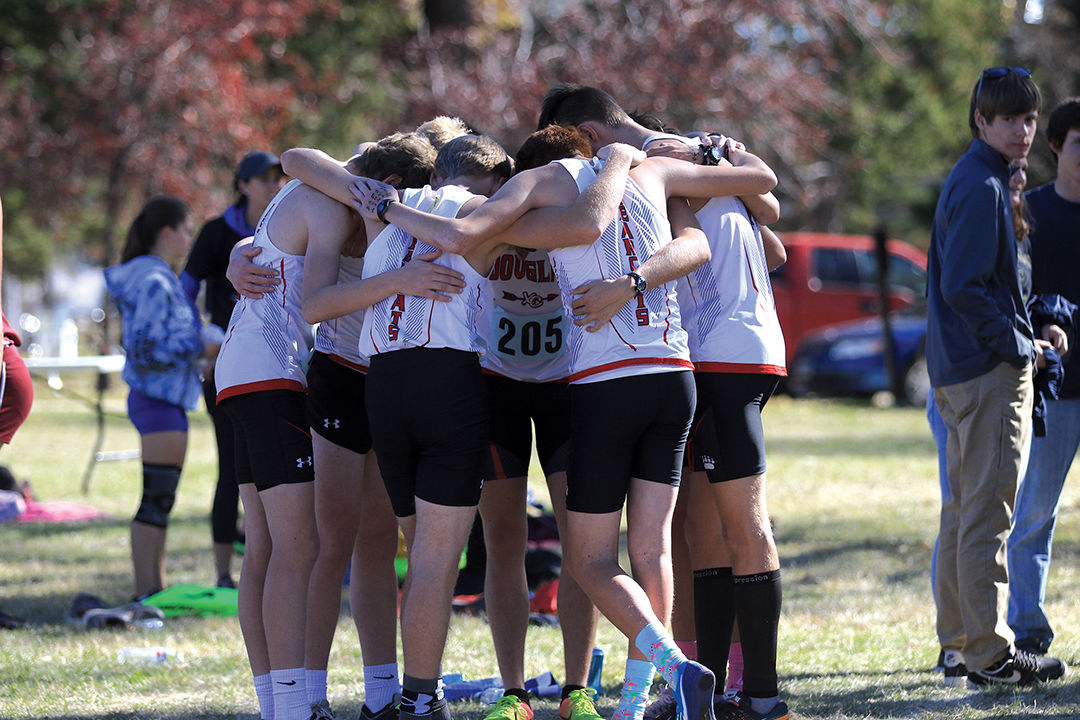 The boys team huddles together at the starting line prior to the season’s biggest challenge. 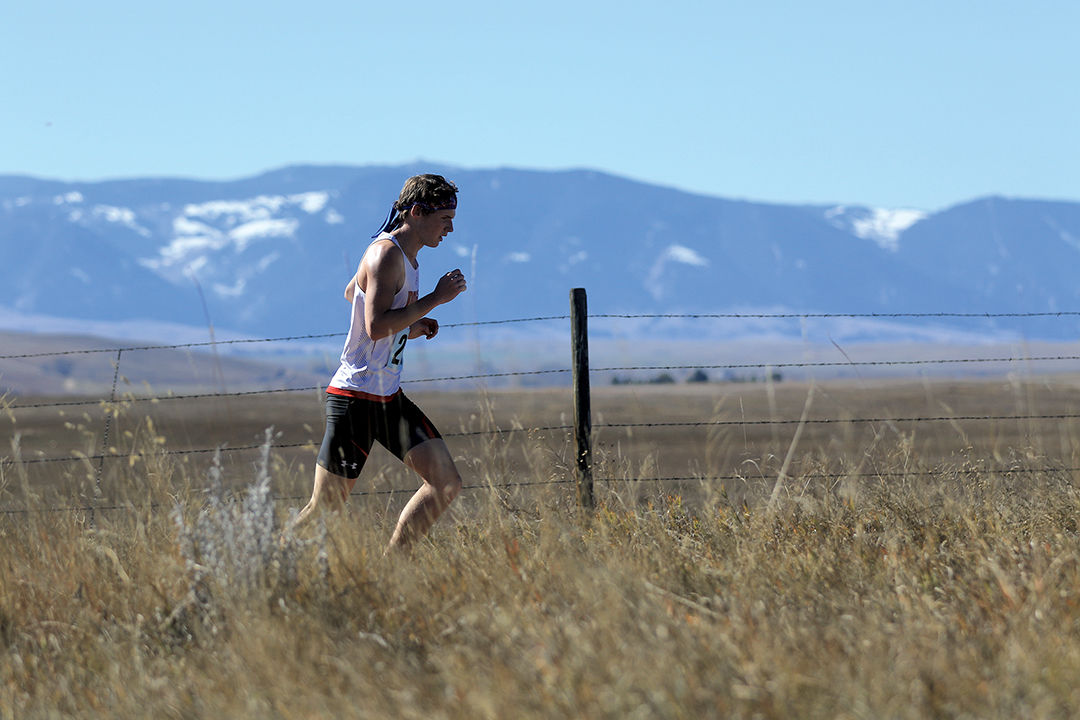 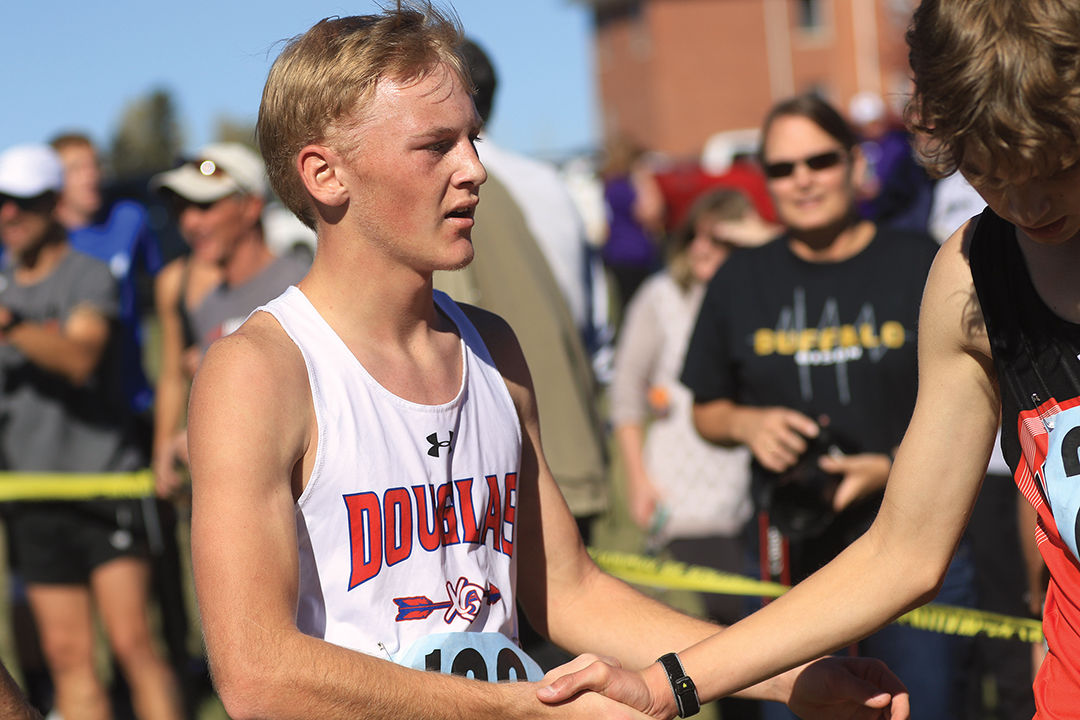 Junior Ethan Eklund shakes the hand of a fellow competitor at the finish line following the 3A boys championship.

Douglas senior Jaylynn Boe exhaustedly runs toward the finish line during the 3A girls championship race. She finished in 23rd with a time of 21:03 to lead the Lady Bearcats.

Freshman Lucie Holt fights through exhaustion and sweat as she runs down the final stretch of the 3A girls championship race.

The boys team huddles together at the starting line prior to the season’s biggest challenge.

Junior Ethan Eklund shakes the hand of a fellow competitor at the finish line following the 3A boys championship.

As they gingerly stretched and warmed up at the starting line, the Douglas cross-country teams were eager to run their final race of the season. It was the moment they had been building toward since training began in the early parts of the summer.

They knew it was going to be their most challenging race of the season. With hundreds of runners and spectators on site at the Veteran Affairs Hospital Grounds in Sheridan, it was their last chance to put it all out on the course.

“Running at state is a whole new competition,” Douglas junior Ethan Eklund said. “Every year when you get to state you know it’s not going to be like anything else because there are always those kids who thrive on the competition and push harder than they ever have before.”

The starting gun sounded across the state championship grounds, signaling the start of the 3A girls race. Sydney Thorvaldson of Rawlins immediately darted out ahead of the pack, forcing all other runners to immediately play catchup. Through the first 800 meters, senior Jaylynn Boe carried the pace for Douglas, holding strong in 20th as she approached the one-mile mark where teammates Cameryn Spence and Hazen Walmsley offered words of encouragement.

Behind Boe, junior RayAnne DeLuna held her own in the front half of the pack as she neared the two-mile mark and attempted to hold off runners close behind her. Boe crossed the finish line first for Douglas in 23rd in a time of 21:03. The near 70-degree day seemed to get the best of her and DeLuna as Boe finished 41 seconds off her personal best time at state of 20:22, set in 2016 when she earned all-state in 8th. Lucie Holt and Mekaila Snyder, both freshmen and competing at the state championship for the first time, finished 62nd and 92nd, respectively. Seniors Allie Peasley and Riley Vialpando kept a steady pace for the duration of the race, staying within just seconds of each other from start to finish. Peasley finished in 26:38 and Vialpando in 26:45 to close out their high school cross-country careers.

“I told them before they ran that this race was going to hurt,” head coach Rachel Carlson said. “Told them to come out and give everything they had. I’m really proud with how they ran.”

The girls finished in 12th with 302 points, a bittersweet ending for the Lady Bearcats and Carlson as it was the final race for Boe, Peasley and Vialpando.

An hour and 30 minutes later, the final starting gun of the day went off as the 3A boys scampered away from the starting line. Senior Kenyion Townsend capped off a phenomenal cross-country career with his best time at state, crossing the finish line in 17th at 17:28. Freshman Cameryn Spence, one of the most surprising runners for Douglas this season, kept close with some of the state’s best runners and took 33rd in 18:12. Eklund was the next to enter the chute for the Bearcats in 18:44, a season-best time.

“Personally I prefer that type of race environment because as most people say, running is 80 percent mind and 20 percent body,” Eklund said. “When it comes to state, that’s when the mind game kicks in. After the smoke has cleared and everyone has crossed the finish line, the ones with the strongest wills and drive are the ones who do better and that’s why I love this sport.”

When asked about Eklund’s performance, Carlson added: “He had a really focused week and went out and ran really smart.”

In 65th, senior Hazen Walmsley ran his final race and finished just two seconds off his best time at state of 19:18 set in 2016. Sophomore Carson Selk set a personal best in 19:27 and freshman Bryndon Wagner and Kyle Igo finished a second apart in their first state championship experience.

Overall, the boys team took 10th with 239 points and although it wasn’t the result they were hoping for, there was much to be proud of.

“It was all guts and glory,” Carlson said with high praise. “I’m still in shock about it, it was really emotional. I couldn’t say too much to them afterward but it was bittersweet.”

Coach Carlson and her team know this year’s group of seniors will leave a lasting impact on the Douglas cross-country program.

Townsend, Walmsley, Boe, Vialpando and Allie and Audrey Peasley set a leading example for the up and coming runners in the program and it didn’t go unnoticed.

“Kenyion (Townsend) has always been great to run with and has always been a huge support to everyone and cheers them on and it’ll be hard not to have that competition,” Eklund said. “Both he and Hazen (Walmsley) were great role models for the whole team and always gave the boys team someone to chase after.”

For the girls team, Boe finished all-state in 2016, a goal she had been striving for since she was a kid.

Carlson felt a sea of emotions when it was all said and done on Saturday. And after a season in which many PRs were set and then again broken, there’s much to takeaway from another season in the books.

“They worked their butts off every day,” Carlson said. “They were always eager to learn and showed it with their work ethic.