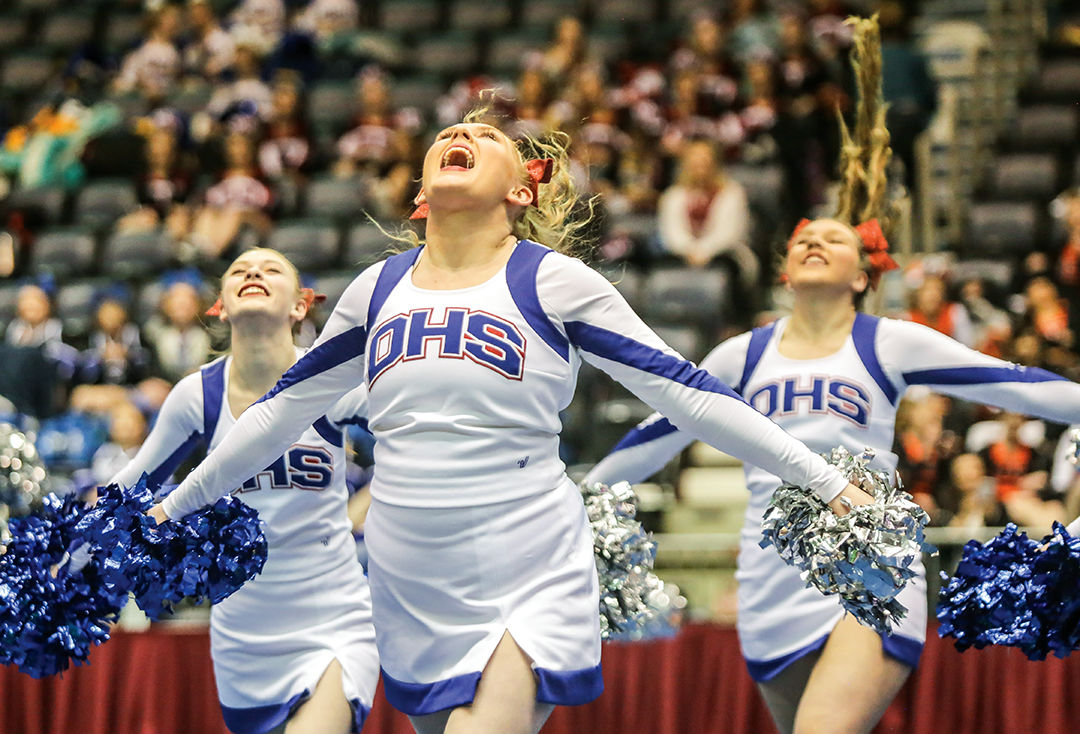 Dazlynn Cornick and McKenzie Moore strut their stuff during the state cheer competition. The team earned second place at the state spirit competition for their performance. 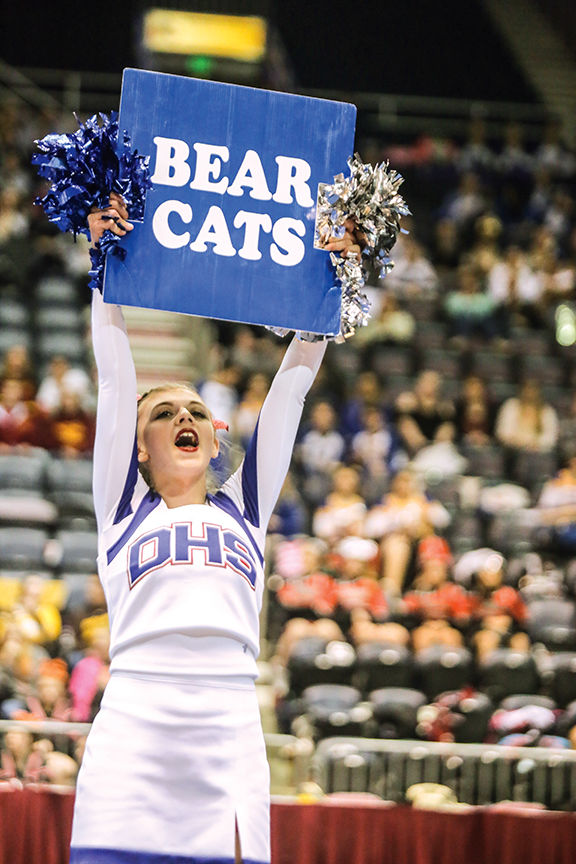 Jaedyn Miller gets the crowd chanting for the Bearcats during the state cheer competition. 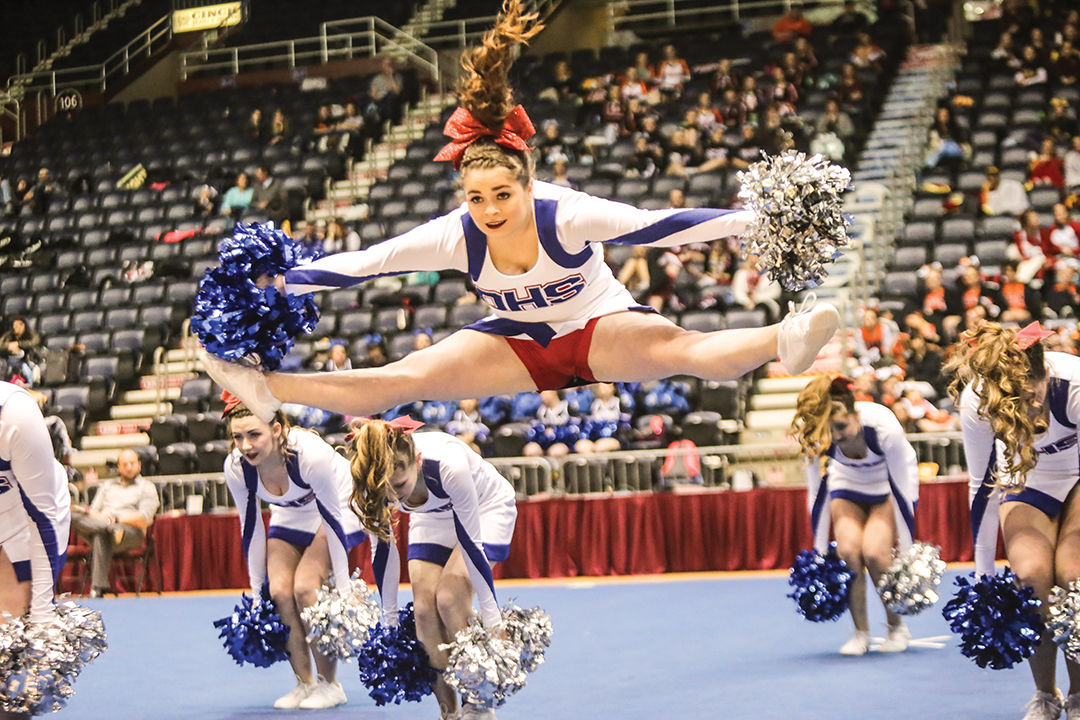 Samantha Haukerei shows off her abilities at the Casper Events Center March 7. 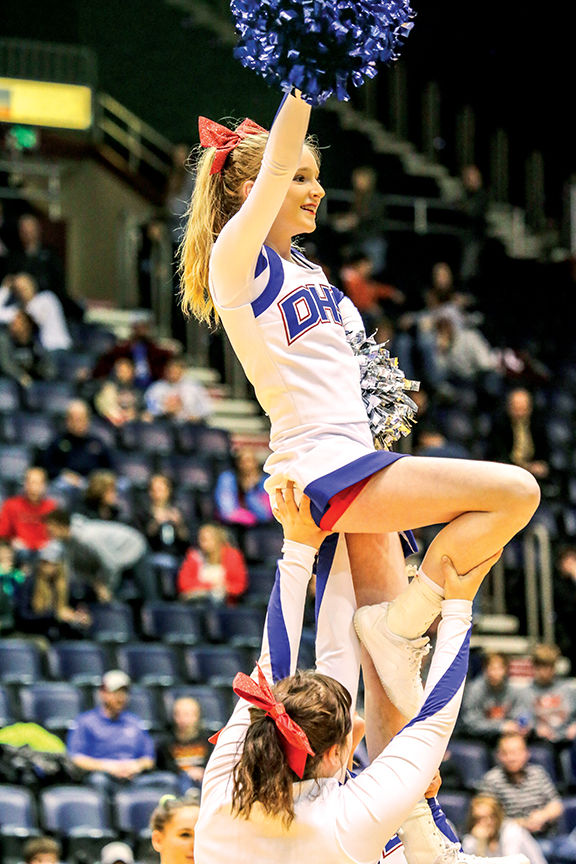 Heather Christensen is lifted high in the air during the halftime performance at the girls’ state basketball finals.

Dazlynn Cornick and McKenzie Moore strut their stuff during the state cheer competition. The team earned second place at the state spirit competition for their performance.

Jaedyn Miller gets the crowd chanting for the Bearcats during the state cheer competition.

Samantha Haukerei shows off her abilities at the Casper Events Center March 7.

Heather Christensen is lifted high in the air during the halftime performance at the girls’ state basketball finals.

Cheerleading may seem like just girls with pom-poms on the sidelines. To the Bearcat cheer squad, it’s so much more.

It’s a physically and mentally demanding sport that takes countless hours of memorizing complex routines combined with both strength and endurance.

The work paid off for the girls this year when they performed a nearly flawless non-stunt routine and earned second place at the state cheer competition this week in Casper.

This is quite an improvement from last year when the team had dwindled to only four cheerleaders by the end of the season.

It’s a testament to this squad’s dedication and their new coach Havely Holt.

“I think in order to be successful at cheerleading you really need to have a lot of conditioning and cardio,” Holt said Monday. “Both are things we are definitely going to work on for next year so that we are able to learn all the new stunts and skill that we weren’t able to do this year.”

The girls also took the floor for the stunt cheer competition and the young team grabbed fifth in the more demanding event.

“We didn’t get any deductions on our stunt routine,” Holt said. “I think that says a lot about us building the basics. I think now that we have those basics down we are ready to really step it up next year and really add on to those skills. It’s a progression with the stunt routine. Since you are throwing girls in the air you need to make sure you know what you are doing and be safe. Otherwise, people will get hurt.”

The team lost a lot of their experienced stunt performers this year, and Holt has had to rebuild the team and teach the basics to the squad. To Holt and the squad earning fifth in stunt with the group is a success.

They really got excited after their second place finish in their non-stunt routine.

“It was pretty exciting to watch,” Holt said. “I watched them practice it over and over again. Every time they do it there is something we need to improve or a little thing we need to fix. It’s never really done because there is always something to perfect. So when they went out there and nearly did it flawlessly, it was so much fun to watch. They peaked at just the right time.”

This victory has been six months in the making. Cheerleading, although broken into two seasons, tends to keep the same girls all year, making it the longest season of any sport.

Cheerleading technically falls under high school activities and not a sport according to the Wyoming High School Athletics Association, but it is more demanding than some WHSAA sports, and they practice just as hard.

Practice start two weeks before the school year with two-a-day practices to get prepared for football season. They spend their hours conditioning, learning cheers and working on the choreography for the state competition.

Between all this, they entertain the crowds at every home game and as many away games as they can for multiple sports going on at the same time.

In the fall they perform on the chilly sidelines of the Friday night football games as well as at wrestling matches and volleyball games.

During the winter they divide their time between the busy schedules of boys and girls basketball as well as develop their state competition routines.

“At the end of the season we are practicing until 8 p.m.,” Holt said. “We have to make sure that we get everything in. I don’t think people realize how much time they actually dedicate to cheer. The time really seems to fly by. We never have enough time to get it all in. It’s definitely a challenge to figure out time management.”

All this commitment to their art is important to Holt and the girls. To them, cheerleading is a vital role at the games.

“Our goal is to keep the crowd involved in the sport or activity in a positive way. Sometimes the crowds can get off track in their spirit, and the girls do a good job keeping them going in a positive direction, upbeat and involved,” Holt said “I think it’s important for the cheerleaders to be the positive role models for those involved. They also make those connections with the players. We reach out to the teams to support them. Even though we can’t make every game we try and have someone there to support them. “

As important as positive participation is to the girls, Holt is confident being on the squad is good for the cheerleaders as well.

“I think that it just helps to foster those interpersonal relationships at school,” she said. “It helps to have kids involved in all different activities so they don’t get stuck in their own social group, and they branch out and interact with people that they don’t normally interact with.”

For these dedicated athletes, their season of being positive role models and learning life lessons continues in the offseason.

Holt is proud of how her girls did this year.

“I have heard a lot of comments about how great the girls look this year and how well they work together,” she said. “When the girls hear this it keeps them encouraged. I appreciate hearing those kind words from other people. The community has been really great in supporting us.”

“We are going to take a few weeks off and then get started in some extra fundraising because the girls always go to a couple of camps in the summer and there is another competition in Colorado that we’d like to enter,” Holt said. “We hope to raise enough that the girls don’t have to spend any money out-of-pocket to go to these things.

“We also have a conditioning program starting soon so that they will be in prime form next fall when cheer starts again.”

The season of cheer has ended, but for these ladies, their dedication is year round. Expect to see more great routines and top finishes from them in the future.